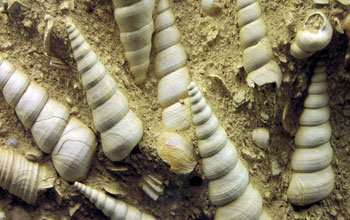 Much of our knowledge about past life has come from the fossil record, but how accurately does that record reflect the true history and drivers of biodiversity on Earth?

"It's a question that goes back a long way to the time of Darwin, who looked at the fossil record and tried to understand what it tells us about the history of life," says Shanan Peters, a geoscientist at the University of Wisconsin-Madison.

In fact, the fossil record can tell us a great deal, Peters says in results of a new study.

In a paper published this week in the journal Science, he and colleague Bjarte Hannisdal of the University of Bergen in Norway show that the evolution of marine life over the past 500 million years has been driven by both ocean chemistry and sea-level changes.

"These results tell us that the number of species in the oceans through time has been influenced by the amount and availability of carbon, oxygen and sulfur, and by sea level," says Lisa Boush, program director in the National Science Foundation (NSF)'s Division of Earth Sciences, which funded the research.

"The study allows us to better understand how modern changes in the environment might affect biodiversity today--and in the future."

The time period studied covers most of the Phanerozoic eon, which extends to the present and includes the evolution of most plant and animal life.

Hannisdal and Peters analyzed fossil data from the Paleobiology Database, along with paleoenvironmental proxy records and data on the rock record.

The scientists used a method called information transfer, which allowed them to identify causal relationships, not just general associations, between biodiversity and environmental proxy records.

"We find an interesting web of connections between these different systems, which combine to drive what we see in the fossil record," Peters says.

For example, marine biodiversity is closely related to the sulfur cycle, says Peters. The "signal" from sea-level--how much the continents are covered by shallow seas--is also important in the history of marine animal diversity, the researchers found.

The dramatic changes in marine biodiversity seen in the fossil record, Peters says, "likely arose through biological responses to changes in the global carbon and sulfur cycles, and to sea level, through geologic time."

Despite its incompleteness, the fossil record is a good representation of marine biodiversity over the past half-billion years, the scientists believe.

The findings also emphasize the interconnectedness of Earth's physical, chemical and biological processes.

"Earth systems are all connected," says Peters. "It's important to realize that when we perturb one thing, we're not just affecting that one thing.

"The challenge is understanding how that perturbation of one thing, for example, the carbon cycle, will affect the future biodiversity of the planet."