Largest black holes ever measured found in "nearby" galaxies 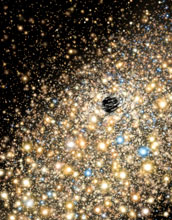 Artist's conception of the stellar environment around a black hole of about 10 billion solar masses.

Astronomers recently discovered the most massive black holes to date. Found in two separate nearby galaxies roughly 300 million light years away from Earth, each black hole has a mass equivalent to 10 billion suns.

"We knew that really large quasars, which are powered by matter falling into black holes, existed in the early universe," said Chung-Pei Ma, an astrophysicist at the University of California, Berkeley and co-author of an article that will be published in Nature on December 8.

"What we hadn't yet found was where the remnants of those quasars--equally large black holes--were in the current universe," she said. "The boisterous quasars may have passed through a turbulent youth to become the quiescent giant elliptical galaxies we see today, harboring hidden black holes at their centers."

Black holes are made of matter so dense that even light can't escape their intense gravitational fields. Exploding stars--known as supernovae--can create relatively small black holes only a few times more massive than the sun, but researchers think these monster black holes are formed in different ways, such as multiple smaller black holes merging into one, or voracious growth by swallowing vast amounts of stars and gas while galaxies are forming.

The gigantic black holes discovered by Ma and her colleagues are so enormous they are capable of consuming anything within a region five times the size of Earth's solar system.

Researchers think that most, if not all, galaxies have a black hole at the center. The larger the galaxy, the larger the black hole it contains. Researchers suggest these blacks holes consume tremendous quantities of gas and dust from the central regions of the galaxy, at which point they become "dormant." The surviving gas may become stars that orbit peacefully within the galaxy.

Their quiet nature is part of what makes these sleeping giants so difficult to observe. "Since black holes cannot be seen, we have to detect them by carefully observing their immediate surroundings," said Nicholas McConnell, first author of the paper. "These galaxies contained enormous masses within a small central volume--too much mass to come from stars alone." These and other factors led the group to conclude that most of the mass is contained in massive black holes.

With support from the National Science Foundation (NSF), and using telescopes at the NSF-supported International Gemini Observatory, as well as the Keck and McDonald observatories, McConnell and Ma were able to map the velocities of stars orbiting the centers of massive elliptical galaxies--data the research team did not have the technical capability to obtain just a few years ago. The new results may help astronomers determine how black holes and galaxies form and develop together over the history of the universe.

"Galaxies are the places where stars and planetary systems form, and supermassive black holes in the early universe set the stage for their formation," said Tom Statler, program director for NSF's division of Astronomical Sciences.

"Black holes played a big role in making our universe what it is today."