The untimely passing of Deanna Kingston 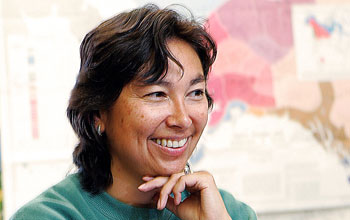 Deanna's contributions to social science from her work on King Island will be a lasting legacy.

As the head of the National Science Foundation's Office of Polar Programs (OPP), I wish to express profound sadness at the death earlier this month of Deanna Paniataaq Kingston, 47, a professor of anthropology at Oregon State University and a prominent pioneer in Arctic social sciences.

Deanna was a pioneer in exploring the intersections of Native knowledge and Western science and ways to combine attributes from both domains for the betterment of all and especially for her beloved community of King Island, Alaska.

A King Island Inupiat herself, Deanna was born in Oregon and was a lifelong resident of the state. But those who knew her were well aware of how Deanna balanced being a part of the King Island community and culture and yet, at the same time, an objective observer of the island's lifeways. Most of her seminal research into such topics as traditional ecological knowledge and the use of Inupiat songs and dances in preserving cultural identity was centered on King Island and benefitted from her personal understanding of the process of relocation of Native peoples and how it affects social cultural systems.

As Anna Kerttula de Echave, Deanna's OPP program officer, noted in a remembrance about Deanna's early work: "... the King Island project was a new concept not only in the way science is done but the way in which Arctic communities can contribute and participate. They would be more than the subjects of research, they would design the research, collaborate with scientists on the fieldwork, and assist in the analysis of the data. Ten years later this is the model for research in the Arctic, but in 1992 this was a revolution."

After earning a doctorate in anthropology from the University of Alaska Fairbanks in 1999, she began teaching at Oregon State University. There she worked with Native students and as an advisor for the university's Native American Longhouse.

At the national and international levels, she served on OPP's Advisory Committee and also on the Study for Environmental Arctic Change Responding to Change Panel. She also participated in numerous workshops and conferences including the "Designing an Arctic Observing Network" in Copenhagen, Denmark.

At her death, she was the principal investigator on two NSF grants; one on "Indigenous-State Relations in Alaska and Beyond" and the other on "Indigenous Ecological Knowledges and Geographic Information Systems."

Deanna's contributions to social science from her work on King Island will be a lasting legacy.

Our thoughts and best wishes go out to Deanna's son, Edward Tattayuna Kingston and her numerous relatives in Oregon and Alaska at this very difficult time.