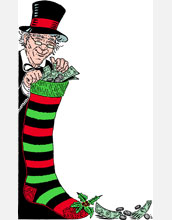 Americans typically spend $70 billion more in December than in November.

View a webcast with University of Minnesota economist Joel Waldfogel.

Americans typically spend $70 billion more in December than in the average of November and January (the months around December). In a recent National Science Foundation-sponsored interview, Joel Waldfogel, the Carlson School's Frederick R. Kappel Professor of Applied Economics at the University of Minnesota uses that increase to measure the amount of holiday gift-giving. This level of spending is lower than in other countries. "We're about the 20th largest in terms of countries in the world," said Waldfogel, referencing how much U.S. December spending increases.

Waldfogel is the author of Scroogenomics: Why You Shouldn't Buy Presents for the Holidays. He notes that even though the U.S. economy has grown since the turn of the last century, the amount of U.S. spending in December (relative to November and January) has not kept pace with that growth. The extra spending in December is less as a percentage of Gross Domestic Product than it has been at any time over the last 75 years.

He makes an additional point that the impact of this spending is even smaller if measured by the satisfaction it produces. The reason, he said, is simple: "The problem with gift giving is that somebody is going out and spending $100 on someone else and if the giver does not know exactly what the recipient wants, it is possible for the giver to spend $100 and buy something the recipient would only be willing to pay $50 or perhaps nothing for."

This type of gift giving, said Waldfogel, undermines economically efficient choices. "Whatever amount of spending occurs, it results in less satisfaction than could have occurred if people bought stuff for themselves," which, he claims, results in the loss of billions of dollars in economic value to the overall economy.