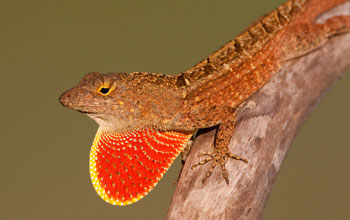 Biologists who released lizards on tiny uninhabited islands in the Bahamas have uncovered a seldom-observed interaction between evolutionary processes.

Jason Kolbe, a biologist at the University of Rhode Island (URI)--along with colleagues at Duke University, Harvard University and the University of California, Davis--found that the lizards' genetic and morphological (form and structural) traits were determined by both natural selection and a phenomenon called the founder effect.

Their research results are published online today in the journal Science.

The founder effect is the loss of genetic variation that occurs when a new population is established by a very small number of individuals from a larger population. It often results in the new population becoming genetically or morphologically different from the original population.

"We rarely observe the founder effect as it happens in nature, but we know that it occurs because islands are colonized by new species over time," said Kolbe.

"What we didn't know was how these evolutionary mechanisms [natural selection and the founder effect] interact with each other."

The scientists learned that differences caused by the founder effect persist even as populations adapt to new environments.

"Evolutionary biologists have been debating the importance of founder effects for more than 70 years," said Sam Scheiner, program director in the National Science Foundation (NSF)'s Division of Environmental Biology, which funded the research. "This study is the first to definitively demonstrate those effects for ecologically important traits."

Kolbe and colleagues randomly collected brown anole lizards from a large island near Great Abaco in the Bahamas, and released one pair on each of seven nearby islands whose lizard populations had been cleared by a recent hurricane.

The source island is forested, while the other islands have short, scrubby vegetation.

Previous research had found that anole lizards living in forests had longer hind limbs than those found in scrub habitat.

Lizards with longer limbs can run faster on the broad perches available in forests, while short-limbed lizards are more adept at moving on the narrower perches found in lower vegetation.

The scientists revisited each of the islands over the next four years to measure the lizards' limb length and collect tissue samples for genetic analysis.

All the new populations survived and increased an average of 13-fold in the first two years, before leveling off.

"We noticed a founder effect one year after starting the experiment, which resulted in differences among the lizards on the seven islands," Kolbe said.

Because the structure of the vegetation on the islands differed from that of the source island, the scientists predicted that natural selection would lead the lizards to develop shorter limbs.

The fact that the populations maintained their order from longest to shortest limbs throughout the experiment means that both the founder effect and natural selection contributed to their current differences.

According to Kolbe, the founder effect is rarely observed in nature, with most previous research conducted in the laboratory.

"Ours is the first to study this process experimentally in a natural setting, and we were able to account for multiple evolutionary mechanisms through time," he said. "We manipulated the founding of these islands, but everything else about it was natural."

The next step in the research will be to determine how long the founder effect persists before other factors erase its signature.

Co-authors of the paper are Kolbe; Manuel Leal of Duke University; Thomas Schoener and David Spiller of the University of California, Davis; and Jonathan Losos of Harvard.

The study was also funded by the National Geographic Society.