Results of study on prairie grasslands show differences across the months 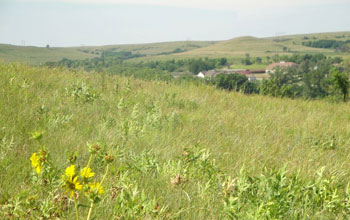 Does it matter whether long periods of hot weather, such as last year's heat wave that gripped the U.S. Midwest, happen in June or July, August or September?

Scientists studying the subtle effects of heat waves and droughts say that when such events happen makes a big difference.

Based on more than 25 years of data from the National Science Foundation (NSF) Konza Prairie Long-Term Ecological Research (LTER) site in Kansas--one of 26 such NSF LTER sites across the globe--ecologists looked at how droughts and heat waves affect grass growth during different months of the year.

The journal Proceedings of the National Academy of Sciences (PNAS) published their results today.

"This study identifies variation in the timing and magnitude of drought and heat as keys to an ecosystem. The results highlight the importance of long-term data to understanding the complex interactions that underlie ecological responses to climate change."

Neither drought nor heat waves in August or September seemed to have an effect on grass growth.

"Future projections need to incorporate predictions of not only how much climate will change, but when during the year changes will happen," says Joseph Craine of Kansas State University, the paper's lead author.

Co-authors of the paper are Jesse Nippert, Adam Skibbe and Stacy Hutchinson of Kansas State University; Andrew Elmore of the Appalachian Laboratory, University of Maryland Center for Environmental Science; and Nathaniel Brunsell of the University of Kansas.

"That the effects of climate change on grasslands depend on when they happen may not be much of a surprise--little snow in winter may have less effect than low rainfall in summer, for example," Craine says.

The sensitivity of grasslands to the timing of drought and heat waves was a big surprise, however.

"Heat waves mattering only during late July was not something we expected," says Craine. "Everyone seemed to think that August heat waves and drought would have major effects on grass productivity, but we couldn't find any."

The effects of drought and heat waves in fact declined over the summer season.

Other studies showed that drought and heat waves affect parts of ecosystems differently.

Bison that graze the prairie don't seem to respond to heat waves, but may gain more weight in years with drier weather--provided that droughts come in late June or early July rather than in August or later.

The researchers are looking at long-term records from other LTER sites to determine whether there's a uniformity to the Konza findings.

"If these patterns are general across ecosystems," the scientists write in their paper, "predictions of ecosystem response to climate change will have to account not only for the magnitude of climate variability but also for its timing."

For now, says Craine, "the results will change the types of questions we ask about climate and ecosystems."