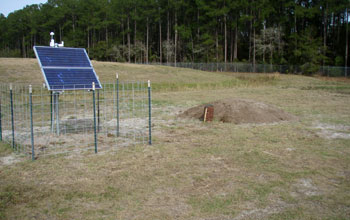 Transportable Array Station 457A in Florida: first such seismic station on the U.S. East Coast.

Yulee, Florida. Not a place one usually thinks of as an Earthquake Epicenter.

But this swampland not far from the Georgia state line is now home to a state-of-the-art seismic station known as 457A.

Here, within a few miles of the Atlantic Ocean, 457A has been installed to record ground motion from earthquakes. Earthquakes do happen on the East Coast of the United States, as the Virginia quake of August, 2011 attests.

The new seismic station is part of EarthScope, a project funded by the National Science Foundation (NSF). It's one of some 400 stations collectively called the Transportable Array.

The array has--one-by-one--slowly been making its way across the country in a wave of instrumentation. Transportable Array Station 457A is the first such station to reach the East Coast.

On the West Coast in 2004, the array started its eastward migration. As it moved, it transmitted information from more than 1,350 locations across the United States.

By the end of 2013, the array's East Coast stations will occupy 400 sites from Florida in the south to Michigan and Maine in the north, including sites in the southernmost regions of Ontario and Quebec, Canada.

Researchers placed the stations in a grid approximately 70 kilometers, or some 43 miles, apart each operates for about two years.

Data recorded by the seismometers help scientists develop a better understanding of the geologic structure inside the North American continent.

"Scientists can use these data to generate 3-D images of Earth's interior that are very similar to CT scans in medicine," says Greg Anderson, NSF program director for EarthScope. "The images show Earth's structure from the core to the surface in never-before-seen detail."

"With the installation of 457A," says Anderson, "the Transportable Array has stations active on all four coasts of the 'lower 48': Pacific, Atlantic, Great Lakes and Gulf of Mexico."

Each station is self-contained, using solar panels to recharge the batteries that provide power to the seismometer and other sensors and electronic systems. The entire instrument is placed in a vault and buried six feet below the surface.

"Because the western part of the country regularly experiences earthquakes, that region has dozens of permanent seismometers to observe fault movements," says Bob Woodward, director of the USArray, the seismic component of EarthScope.

"Seismic stations in the eastern third of the U.S. are much less common, although earthquakes do occur, as we all learned last August."

Transportable Array seismometers are extremely sensitive. They can detect earthquakes at magnitude 5.0 or greater--"sensing" them as far away as the opposite side of the planet--as well as record smaller quakes that occur regionally and locally.

Each station includes a high-performance barometer and an infrasound microphone, and sensors to record temperature and pressure.

Data collected by the station's instruments are transmitted in real-time to the Array Network Facility at the University of California, San Diego, then archived at the IRIS (Incorporated Research Institutions for Seismology) Data Management Center in Seattle for use by researchers around the world.

From its underground crypt, 457A will be sending messages to geologists--and to all of us.