In Honor of Engineering 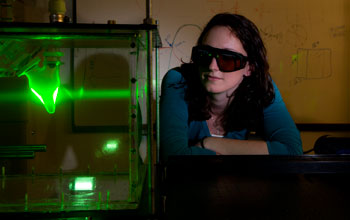 The work of engineers is diverse, including developing tools for treating heart disease.

From creating the safe infrastructure of our built environment to the efficient processes of our daily lives to the cutting-edge technology we carry in our pockets, engineers design our modern world, and National Engineers Week (February 19-25, 2012) honors their contributions and aims to recruit a diverse community to join their ranks.

In his remarks, Suresh will highlight several priority initiatives for NSF in support of STEM activities and education, including the critical role of engineers. Suresh, himself an engineer, was dean of the school of engineering and the Vannevar Bush professor of engineering at the Massachusetts Institute of Technology (MIT) prior to his arrival at NSF. Throughout his career, his research has focused on the mechanical properties of structural and functional materials, materials design and characterization, and possible connections between cellular nanomechanical processes and human disease states.

The director's remarks highlight NSF's six-decade commitment to supporting engineering research and innovation in the United States and the maintenance of a diverse and robust national engineering workforce, themes that have driven EWeek since its founding in 1951 by the National Society of Professional Engineers.

"Engineers Week, now an international outreach event, highlights the impact of engineers on modern society," says Suresh. "The week-long celebration not only inspires the next generation of engineers, but also recognizes the critical role of engineers in advancing fundamental scientific knowledge, improving medical technologies, addressing global challenges, and enhancing quality of life and economic prosperity."

For decades, NSF has supported EWeek events and the National Engineers Week Foundation, the organization that coordinates the week, through the participation of NSF awardees, and the volunteer and advisory activities of NSF staff. EWeek is primarily supported through the financial contributions and participation of engineering professional societies and industry partners, which serve as mentors for rising engineering students and recruiters that provide careers to the more than 1.5 million engineers in the United States alone.

In recognition of EWeek, each year several award-winning, NSF-supported public television programs that air on PBS stations across the country devote content to engineering and participate in EWeek activities. Supported by NSF's Directorate for Education and Human Resources, such programs include the popular SciGirls (produced by Twin Cities Public Television), Cyberchase (produced by Thirteen/WNET) and Design Squad Nation  (produced by WGBH), which is also supported by the NSF Directorate for Engineering.

In recent years, NSF Directorate for Engineering volunteers have organized a popular booth at the Discover Engineering Family Day (which occurred this year on Feb. 18 at the National Building Museum in Washington, D.C.). Staffed by NSF employees--joined this year by engineering students from Howard University--the interactive exhibit featured a tsunami simulator and brought together representatives from Purdue University and the Hinsdale Wave Research Lab at Oregon State, part of NSF's George E. Brown, Jr Network for Earthquake Engineering Simulation.

The volunteers helped kids build and test Lego® models against the waves from the simulator, illustrating how engineering design principles hold up against the simulated forces of nature - and how poor engineering can have disastrous results.

For more on engineers and engineering, see the online publication Making Imagination Real.