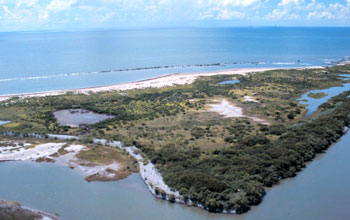 The Earth's crust beneath the Mississippi Delta sinks at a much slower rate than what had been assumed.

That's one of the results geoscientists report today in a paper published in the journal Earth and Planetary Science Letters.

The researchers arrived at their conclusions by comparing detailed sea-level reconstructions from different portions of coastal Louisiana.

NSF's Directorates for Geosciences and for Social, Behavioral & Economic Sciences funded the research.

"The results provide valuable new insights about the factors that affect shorelines and other locations in the Gulf Coast area now and into the future," says Baerwald.

"Our study shows that the basement underneath key portions of the Mississippi Delta, including the New Orleans area, has subsided less than one inch per century faster over the past 7,000 years than the more stable area of southwest Louisiana," says paper co-author Torbjörn Törnqvist of Tulane University.

The difference is much lower than previously believed.

"Other studies have assumed that a large portion of the Earth's crust underneath the Mississippi Delta subsided at least 30 times faster due to the weight of rapidly accumulating sediments in the delta," says Törnqvist.

The paper, co-authored by Tulane scientists Shi-Yong Yu and Ping Hu, reveals some good news for residents of the New Orleans area.

Large structures such as coastal defense systems could be relatively stable, provided they are anchored in the basement at a depth of 60-80 feet below the land surface.

"These subsidence rates are small compared to the rate of present-day sea-level rise from the Florida panhandle to east Texas," says Törnqvist.

"The rate of sea-level rise in the 20th century in this region has been five times higher compared to the pre-industrial millennium as a result of human-induced climate change."

Sea level has risen more than eight inches during the past century.

"Looking forward 100 years, our main concern is the continued acceleration of sea-level rise due to global warming, which may amount to as much as three to five feet," says Törnqvist.

"We can now show that sea-level rise has already been a larger factor in the loss of coastal wetlands than was previously believed."