Researchers Use Game to Change How Scientists Study Disease Outbreaks 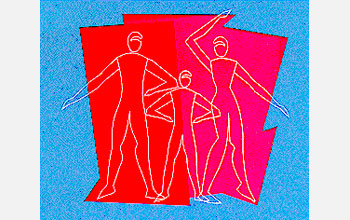 It may seem like a game of tag, but it's an innovative tool for teaching the fundamentals of epidemiology, the science of how infectious diseases move through a population.

An international team of scientists--including researchers who teach an annual clinic at the African Institute for Mathematical Sciences (AIMS) in Muizenberg, South Africa--is helping epidemiologists improve the mathematical models they use to study outbreaks of diseases like cholera, AIDS and malaria.

In 2011, attendees at the clinic were treated to a game of "Muizenberg Mathematical Fever," where players simulate a real life epidemic by passing around pieces of paper that say: "You have been infected."

The paper pieces are followed by instructions for propagating the disease.

The exercise proved so effective in demonstrating concepts in epidemiology that a discussion of the game is published in today's issue of the journal PLoS Biology.

"Infectious disease modeling is an established field of study in bio-mathematics," said Juliet Pulliam, a biologist at the University of Florida's Emerging Pathogens Institute and co-author of the paper.

"But there has been a tendency for mathematicians to operate separately from practitioners on the ground who track diseases."

The game was intended to convince all players in the epidemiology field that teamwork is the better approach.

EEID is a joint NSF-National Institutes of Health program. At NSF, it is co-funded by the Directorates for Biological Sciences and Geosciences.

"This collaborative effort is training researchers in these techniques," said Scheiner, "as well as strengthening ties between U.S. and African students and scientists."

"Not knowing how data about an outbreak were collected can lead to misinterpretations," Pulliam said.

For example, if procedures change for how infected individuals are counted, it could create a spike in data that falsely portrays how a disease is being spread.

The misinformation, once introduced into a model, could throw off projections and interfere with efforts on the ground to prevent further outbreaks.

Ecologist Steve Bellan of the University of California, Berkeley, lead author of the paper, cites cases where collaborations between bio-mathematicians and classical epidemiologists have resulted in valuable lessons for tracking the spread of diseases.

HIV interventions and efforts to eliminate trachoma, a bacterial infection that causes blindness, successfully have used the tag-team approach, he said.

In both cases, studies have shown that when practitioners employ the power of mathematical modeling to strategically develop, analyze and scale-up interventions, they are more likely to interrupt the progress of an epidemic.

"This is about the importance of collaboration," said Bellan. "No one can be an expert in everything."

"In fact, the two sides typically meet up somewhere along the line during the process of an epidemiological study," he said. "We want to see more scientists working together from the start."

Toward that end, Bellan, Pulliam and six other scientists from South Africa, Canada and the United States offer two-week clinics every year at AIMS.

The clinics immerse epidemiological number-crunchers more fully into the human aspects of how disease spreads.

"We were sitting in the office the night before the recent clinic began, talking about how someone had shown up sick in a previous year and gotten everyone else sick," Pulliam said.

"Then Steve said something about how great it would be if we had captured data from that outbreak for use in the workshop."

The discussion sparked the idea to create a similar scenario in real-time by creating a fictitious disease. "We pieced it together in about an hour," said Bellan.

An "infectious" piece of paper serves as the agent for spreading "Muizenberg Mathematical Fever."

The paper notifies the receiver that he or she has been exposed, then instructs the infectee to email Bellan of his or her fate, use a random number generator to determine how many others should be infected,then pass the appropriate number of papers to other participants at the clinic.

The rules serve to propagate the disease, but also to build a data set of who infected whom and when.

"The drill produced an outbreak with data that looks like a real epidemic," said Pulliam.

Clinic attendees are usually more mathematician than epidemiologist, she said. They typically spend the first week just talking about where data sets come from, who collects them and what the numbers refer to.

"Using the game as a way to demonstrate those issues instead of talking about them is instructive on its own," she said.

But the real benefit came during the second week, when people working in groups experimented with various epidemiological models using actual data sets from HIV studies or other ongoing projects.

"Many opted to work with data sets from the game," said Pulliam, "because they were really tangible."

They found that familiarity with the process for collecting data greatly improved their ability to customize mathematical models so they accurately represented how a disease moved through a population.

That's exactly what we wanted them to get out of the workshop, Bellan and Pulliam said.