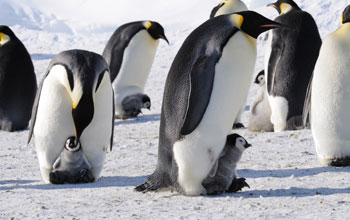 View a video with Michelle LaRue of the University of Minnesota.

A new study using satellite mapping technology reveals there are twice as many emperor penguins in Antarctica than previously thought.

The results provide an important benchmark for monitoring the impact of environmental change on the population of this iconic bird, which breeds in remote areas that are very difficult to study because they often are inaccessible with temperatures as low as -58 degrees Fahrenheit.

Reporting this week in the journal PLoS ONE, an international team of scientists describe how they used Very High Resolution satellite images to estimate the number of penguins at each colony around the coastline of Antarctica.

Using a technique known as pan-sharpening to increase the resolution of the satellite imagery, the science teams were able to differentiate between birds, ice, shadow and penguin poo or guano. They then used ground counts and aerial photography to calibrate the analysis.

Lead author and geographer Peter Fretwell at British Antarctic Survey (BAS), which is funded by the U.K.'s Natural Environment Research Council, explains, "We are delighted to be able to locate and identify such a large number of emperor penguins. We counted 595,000 birds, which is almost double the previous estimates of 270,000-350,000 birds. This is the first comprehensive census of a species taken from space."

On the ice, emperor penguins with their black and white plumage stand out against the snow and colonies are clearly visible on satellite imagery. This allowed the team to analyze 44 emperor penguin colonies around the coast of Antarctica, and seven previously unknown colonies.

"The methods we used are an enormous step forward in Antarctic ecology because we can conduct research safely and efficiently with little environmental impact, and determine estimates of an entire penguin population, said co-author Michelle LaRue from the University of Minnesota and funded by the U.S. National Science Foundation (NSF).

"The implications of this study are far-reaching: we now have a cost-effective way to apply our methods to other poorly-understood species in the Antarctic, to strengthen on-going field research, and to provide accurate information for international conservation efforts."

NSF manages the U.S. Antarctic Program through which it coordinates all U.S. scientific research on the southernmost continent and aboard ships in the Southern Ocean as well as related logistics support.

Co-author and BAS biologist Phil Trathan noted, "Current research suggests that emperor penguin colonies will be seriously affected by climate change. An accurate continent-wide census that can be easily repeated on a regular basis will help us monitor more accurately the impacts of future change on this iconic species."

Scientists are concerned that in some regions of Antarctica, earlier spring warming is leading to loss of sea ice habitat for emperor penguins, making their northerly colonies more vulnerable to further climate change.

Trathan continued, "Whilst current research leads us to expect important declines in the number of emperor penguins over the next century, the effects of warming around Antarctica are regional and uneven. In the future, we anticipate that the more southerly colonies should remain, making these important sites for further research and protection."

This research is a collaboration between BAS, University of Minnesota/NSF, Scripps Institution of Oceanography and the Australian Antarctic Division.