Wind turbines interact with atmospheric boundary layer near the surface 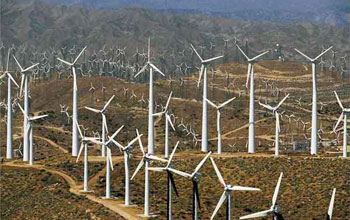 Wind farms are numerous in parts of Texas; scientists report new results on their effects.

Large wind farms in certain areas in the United States appear to affect local land surface temperatures, according to a paper published today in the journal Nature Climate Change.

The study, led by Liming Zhou, an atmospheric scientist at the State University of New York- (SUNY) Albany, provides insights about the possible effects of wind farms.

The results could be important for developing efficient adaptation and management strategies to ensure long-term sustainability of wind power.

"This study indicates that land surface temperatures have warmed in the vicinity of large wind farms in west-central Texas, especially at night," says Anjuli Bamzai, program director in the National Science Foundation's (NSF) Division of Atmospheric and Geospace Sciences, which funded the research.

"The observations and analyses are for a relatively short period, but raise important issues that deserve attention as we move toward an era of rapid growth in wind farms in our quest for alternate energy sources."

Consequently, many nations are moving toward cleaner sources of renewable energy such as wind turbines. Generating wind power creates no emissions, uses no water and is likely "green."

"We need to better understand the system with observations, and better describe and model the complex processes involved, to predict how wind farms may affect future weather and climate," said Zhou.

There have been a growing number of studies of wind farm effects on weather and climate, primarily using numerical models due to the lack of observations over wind farms.

As numerical models are computationally intensive and have uncertainties in simulating regional and local weather and climate, said Zhou, remote sensing is likely the most efficient and effective way to study wind farm effects over larger spatial and longer temporal scales.

To understand the potential impact of wind farms on local weather and climate, Zhou's team analyzed satellite-derived land surface temperatures from regions around large wind farms in Texas for the period 2003-2011.

The researchers found a night-time warming effect over wind farms of up to 0.72 degrees Celsius per decade over the nine-year-period in which data were collected.

Because the spatial pattern of warming mirrors the geographic distribution of wind turbines, the scientists attribute the warming primarily to wind farms.

The year-to-year land surface temperature over wind farms shows a persistent upward trend from 2003 to 2011, consistent with the increasing number of operational wind turbines with time.

"This warming effect is most likely caused by the turbulence in turbine wakes acting like fans to pull down warmer near-surface air from higher altitudes at night," said Somnath Baidya Roy of the University of Illinois at Urbana-Champaign, a co-author of the paper.

While the warming effect reported is local and small compared to the strong background year-to-year land surface temperature variation, the authors believe that this work draws attention to an important scientific issue that requires further investigation.

"The estimated warming trends only apply to the study region and to the study period, and thus should not be interpolated into other regions, globally or over longer periods," Zhou said. "For a given wind farm, once there are no new wind turbines added, the warming effect may reach a stable level."

The study represents a first step in exploring the potential of using satellite data to quantify the possible effects of the development of big wind farms on weather and climate, said Chris Thorncroft of SUNY-Albany, a co-author of the paper.

"We're expanding this approach to other wind farms," said Thorncroft, "and building models to understand the physical processes and mechanisms driving the interactions of wind turbines and the atmosphere boundary layer near the surface."

Other authors of the paper include Lance Bosart at SUNY-Albany, Yuhong Tian of NOAA, and Yuanlong Hu at Terra-Gen Power LLC in San Diego, Calif.