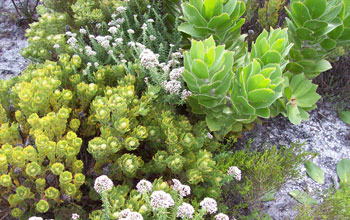 Hundreds of species of unique South African plants may be affected by increasing drought.

Warming climate may mean less rainfall for drought-sensitive regions of the Southern Hemisphere, according to results just published by an international research team.

Geoscientist Curt Stager of Paul Smith's College in Paul Smiths, N.Y., and colleagues found that rainfall in South Africa during the last 1,400 years was affected by temperature--with more rain falling during cool periods and less during warm ones.

The findings, published in the journal Climate of the Past, are supported by the National Science Foundation (NSF).

"The link between climate change and rainfall in certain latitudes can have large effects on ecosystems," said Paul Filmer, program officer in NSF's Directorate for Geosciences.

"Plants, for example, may be able to grow in a wider area, or conversely, be squeezed up a mountain or onto a peninsula. When the affected ecosystem supports a food crop, that can mean a bonanza--or a famine."

Theoretical climate models have shown that global warming could push storm tracks southward "and away from the mainlands of southern Africa, South America and Australia," said Stager.

"This research supports those predictions of increasing aridity, which could lead to major problems for societies and ecosystems in these already-arid places."

A poleward shift in winds could also affect the flow of marine currents around the tip of Africa, changing air and water temperatures farther afield, including in the Atlantic and Indian Oceans.

Stager, lead author of the paper, collected sediment samples from Lake Verlorenvlei in South Africa. By analyzing the diatoms--tiny, glassy-shelled algae--preserved in sediment cores from the bottom of the lake, he and other researchers were able to reconstruct rainfall patterns dating back to 600 A.D.

Two Paul Smith's College undergraduate students, Christiaan King and Jay White, also participated in the study, along with scientists from the University of Maine and from institutions in South Africa and Europe.

Rainfall at the southernmost tip of Africa is governed by a sinuous belt of eastward winds that migrate like a meandering river, depending on the season.

In summer months, these winds drift closer to Antarctica, carrying rain clouds over the ocean; in winter, the winds move over the African continent.

The shifting winds bring rains that provide much of the annual water supply.

"A poleward retreat of these winds would have serious consequences for cities like Cape Town, for farms and wineries, and for local animal and plant communities," Stager said.

"The same also appears to be true for the semi-arid winter rainfall regions of South America and Australia-New Zealand."

Michael Meadows, a scientist at the University of Cape Town who co-authored the paper, said that hundreds of species of rare flowering plants native to the area's fynbos ecosystem are threatened by the changes.

"These plants are tough, and are already used to dry conditions," Meadows said. "But more aridity could make fires more frequent, which could damage the soils and make it even harder for the plants to survive.

"Unfortunately, this is their only native habitat, so such a change might threaten their existence."

According to Stager, such links to mobile storm tracks make these regions exceptionally vulnerable to the effects of greenhouse gas build-up.

"When it comes to climate change, there's more to consider than warming alone," he said. "In places like these, increasing drought could bring far-reaching challenges."