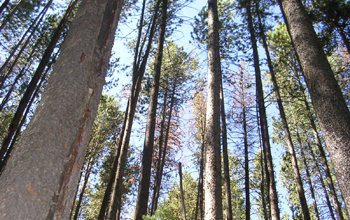 The hordes of bark beetles that have bored their way through more than six billion trees in the western United States and British Columbia since the 1990s do more than kill stately pine, spruce and other trees.

Results of a new study show that these pests can make trees release up to 20 times more of the organic substances that foster haze and air pollution in forested areas.

A paper reporting the findings appears today in the journal Environmental Science & Technology, published by the American Chemical Society.

The beetles bore into the bark of pine trees to lay eggs.

Gases called volatile organic compounds (VOCs) are released from the bore holes, which act as defense mechanisms against the beetles.

VOCs, however, also contribute to the smog and haze that obscures views of natural landscapes in U.S. national parks and other natural areas where tourists flock in summer.

"These results highlight one of the many potential feedbacks due to aerosols, which continue to be the greatest challenge to improving predictive models for air quality, visibility and climate," says Alex Pszenny, program director in the National Science Foundation's Division of Atmospheric and Geospace Sciences, which funded the research.

To determine how beetle attacks affect the atmosphere, the researchers measured VOC levels in the air near healthy and infected pine trees.

They found that beetle-infested trees release up to 20 times more VOCs than healthy trees near the ground surface.

The predominant type of VOC released by trees was called ß-phellandrene.

The data suggest that the bark beetle epidemic in the western United States could have led to higher concentrations of organic compounds in the air, which may contribute to haze.

The haze, say the scientists, may in turn harm human health, reduce visibility and affect climate.

Other authors of the paper are Hardik Amin and Aaron Brown of Southern Illinois University Carbondale; P. Tyson Atkins of the Desert Research Institute; Rachel Russo of the University of New Hampshire; and Barkley Sive of Appalachian State University in Boone, N.C.