Assembling, Visualizing and Analyzing a Tree of All Life 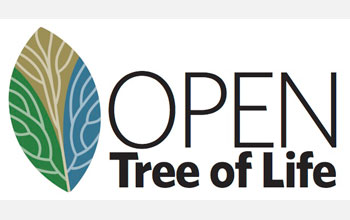 The "Open Tree of Life" is one of three major new scientific projects funded by the NSF.

A new initiative aims to build a comprehensive tree of life that brings together everything scientists know about how all species are related, from the tiniest bacteria to the tallest tree.

Researchers are working to provide the infrastructure and computational tools to enable automatic updating of the tree of life, as well as develop the analytical and visualization tools to study it.

Scientists have been building evolutionary trees for more than 150 years, since Charles Darwin drew the first sketches in his notebook.

Darwin's theory of evolution explained that millions of species are related and gave biologists and paleontologists the enormous challenge of discovering the branching pattern of the tree of life.

But despite significant progress in fleshing out the major branches of the tree of life, today there is still no central place where researchers can go to visualize and analyze the entire tree.

Now, thanks to grants totaling $13 million from the National Science Foundation's (NSF) Assembling, Visualizing, and Analyzing the Tree of Life (AVAToL) program, three teams of scientists plan to make that a reality.

"The AVAToL awards are an exciting new direction for an area that's a foundation of much of biology," says Alan Townsend, director of NSF's Division of Environmental Biology. "That's critical to understanding a changing relationship between human society and Earth's biodiversity."

Figuring out how the millions of species on Earth are related to one another isn't just important for pinpointing an antelope's closest kin, or determining if tuna are more closely related to starfish or hagfish.

If evolutionary trees are so widely used, why has assembling them across all life been so hard to achieve?

It's not for lack of research, or data. Advances in DNA sequencing and evolutionary analysis, discovery of pivotal early fossils, and novel methods and tools have enabled thousands of new evolutionary trees to be published in scientific journals each year.

However, most of these focus on specific, disconnected branches of the tree of life.

Part of the difficulty lies in the sheer enormity of the task. The largest evolutionary trees to date contain roughly 100,000 groups of organisms.

Assembling the branches for all species of animals, plants, fungi and microbes--and the countless more still being named or discovered--will require new computational tools for analyzing large data sets, for combining diverse kinds of data, and for connecting vast numbers of published trees into a synthetic whole.

Another difficulty lies in how scientists typically disseminate their results. A tiny fraction of all evolutionary trees have been published.  Researchers estimate a mere four percent end up in a database in a digital form.

Most of the knowledge is locked up in figures in static journal articles in file formats that may be difficult for other researchers to download, reanalyze or merge with new information.

AVAToL aims to change that.

What makes this program different from previous efforts, scientists say, is its scope: its focus on creating an open, dynamic, evolutionary framework that can be continually refined as new biodiversity data is collected, and its development of computational and visualization tools to scale up tree-based evolutionary analyses.

Researchers will be able to go online and compare their trees to others that have already been published, or download trees for further study.

They'll also be able to expand the tree, filling in the missing branches and placing newly named or discovered species among their relatives.

The goal is to incorporate new trees automatically, so the complete tree can be continuously updated.

In addition to the creation of an updatable tree of life, AVAToL scientists will create new tools for the kinds of research that rely on evolutionary trees and for the collection and analysis of important evolutionary data, including from fossils critical to the placement of many branches in the tree of life.

The three NSF-funded AVAToL projects are:

This project will produce the first online, comprehensive first-draft tree of all 1.8 million named species, accessible to both the public and scientists.  Assembly of the tree will incorporate previously published results and efforts to develop, test and improve methods of data synthesis. This initial tree of life, called the Open Tree of Life, will not be static. Scientists will develop tools for researchers to update and revise the tree as new data come in.

Scientists deal with daunting volumes of data.  One of the most basic challenges facing researchers is how to organize that information into a usable format that can inspire new scientific insights. This project team is working to develop a way to visually portray evolutionary data so scientists can see, at a glance, how organisms are related. The team will create software tools that will enable researchers to visualize and analyze data across the tree of life, enabling research in all areas of comparative biology at multiple evolutionary, space and time scales. The results have the potential to transform the way biologists test evolutionary and ecological hypotheses, enabling new research in fields from medicine to public health, from agriculture to ecology to genetics.

This team of biologists, computer scientists and paleontologists will extend and adapt methods from computer vision, machine learning and natural language processing to enable rapid and automated study of species' phenotypes on a vast scale across the tree of life. The team's goal is to develop large phenomic datasets using new methods, and to provide the scientific community and the public with tools for future such work. Phenomics is an area of biology that measures the physical and biochemical traits of organisms as they change in response to genetic mutations and environmental influences.

Enormous phenomic datasets, many with images, will foster public interest in biodiversity and the fossil record. Phenotypic data allow scientists to reconstruct the evolutionary history of fossil species, in turn crucial for an understanding of the history of life. This project will leverage recent advances in image analysis and natural language processing to develop novel approaches to rapidly advance the collection and analysis of phenotypic data for the tree of life.