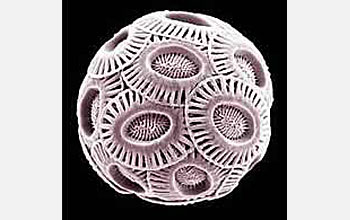 The phytoplankton Emiliania huxleyi offers clues about climate past, present and future.

Until now, studies of Earth's climate have documented a strong correlation between global climate and atmospheric carbon dioxide; that is, during warm periods, high concentrations of CO2 persist, while colder times correspond to relatively low levels.

However, in this week's issue of the journal Nature, paleoclimate researchers reveal that about 12-5 million years ago climate was decoupled from atmospheric carbon dioxide concentrations. New evidence of this comes from deep-sea sediment cores dated to the late Miocene period of Earth's history.

During that time, temperatures across a broad swath of the North Pacific were 9-14 degrees Fahrenheit warmer than today, while atmospheric carbon dioxide concentrations remained low--near values prior to the Industrial Revolution.

The research shows that, in the last five million years, changes in ocean circulation allowed Earth's climate to become more closely coupled to changes in carbon dioxide concentrations in the atmosphere.

The findings also demonstrate that the climate of modern times more readily responds to changing carbon dioxide levels than it has during the past 12 million years.

"This work represents an important advance in understanding how Earth's past climate may be used to predict future climate trends," says Jamie Allan, program director in the National Science Foundation's (NSF) Division of Ocean Sciences, which funded the research.

The research team, led by Jonathan LaRiviere and Christina Ravelo of the University of California at Santa Cruz (UCSC), generated the first continuous reconstructions of open-ocean Pacific temperatures during the late Miocene epoch.

It was a time of nearly ice-free conditions in the Northern Hemisphere and warmer-than-modern conditions across the continents.

The research relies on evidence of ancient climate preserved in microscopic plankton skeletons--called microfossils--that long-ago sank to the sea-floor and ultimately were buried beneath it in sediments.

Samples of those sediments were recently brought to the surface in cores drilled into the ocean bottom.  The cores were retrieved by marine scientists working aboard the drillship JOIDES Resolution.

The microfossils, the scientists discovered, contain clues to a time when the Earth's climate system functioned much differently than it does today.

"It's a surprising finding, given our understanding that climate and carbon dioxide are strongly coupled to each other," LaRiviere says.

"In the late Miocene, there must have been some other way for the world to be warm. One possibility is that large-scale patterns in ocean circulation, determined by the very different shape of the ocean basins at the time, allowed warm temperatures to persist despite low levels of carbon dioxide."

The Pacific Ocean in the late Miocene was very warm, and the thermocline, the boundary that separates warmer surface waters from cooler underlying waters, was much deeper than in the present.

The scientists suggest that this deep thermocline resulted in a distribution of atmospheric water vapor and clouds that could have maintained the warm global climate.

"The results explain the seeming paradox of the warm--but low greenhouse gas--world of the Miocene," says Candace Major, program director in NSF's Division of Ocean Sciences.

Several major differences in the world's waterways could have contributed to the deep thermocline and the warm temperatures of the late Miocene.

For example, the Central American Seaway remained open, the Indonesian Seaway was much wider than it is now, and the Bering Strait was closed.

These differences in the boundaries of the world's largest ocean, the Pacific, would have resulted in very different circulation patterns than those observed today.

By the onset of the Pliocene epoch, about five million years ago, the waterways and continents of the world had shifted into roughly the positions they occupy now.

That also coincides with a drop in average global temperatures, a shoaling of the thermocline, and the appearance of large ice sheets in the Northern Hemisphere--in short, the climate humans have known throughout recorded history.

"This study highlights the importance of ocean circulation in determining climate conditions," says Ravelo. "It tells us that the Earth's climate system has evolved, and that climate sensitivity is possibly at an all-time high."