Fates of polar ice sheets appear to be linked 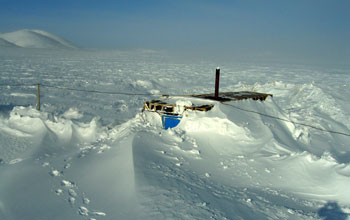 Keys to climate change lie buried beneath "Lake E" in the Russian Arctic.

Intense warm climate intervals--warmer than scientists thought possible--have occurred in the Arctic over the past 2.8 million years.

That result comes from the first analyses of the longest sediment cores ever retrieved on land. They were obtained from beneath remote, ice-covered Lake El'gygytgyn (pronounced El'gee-git-gin) ("Lake E") in the northeastern Russian Arctic.

The journal Science published the findings this week.

They show that the extreme warm periods in the Arctic correspond closely with times when parts of Antarctica were also ice-free and warm, suggesting a strong connection between Northern and Southern Hemisphere climate.

The exceptional climate warming in the Arctic, and the inter-hemispheric interdependencies, weren't known before the Lake E studies, the scientists say.

Lake E was formed 3.6 million years ago when a huge meteorite hit Earth, leaving an 11-mile-wide crater. It's been collecting layers of sediment ever since.

The lake is of interest to scientists because it has never been covered by glaciers. That has allowed the uninterrupted build-up of sediment at the bottom of the lake, recording hitherto undiscovered information on climate change.

Cores from Lake E go far back in time, almost 30 times farther than Greenland ice cores covering the past 110,000 years.

The sediment cores from Lake El'gygytgyn reflect the climate and environmental history of the Arctic with great sensitivity, say Brigham-Grette and colleagues.

The physical, chemical and biological properties of Lake E's sediments match the known global glacial/interglacial pattern of the ice ages.

Some warm phases are exceptional, however, marked by extraordinarily high biological activity in the lake, well above that of "regular" climate cycles.

According to climate reconstructions based on pollen found in sediment cores, summer temperatures and annual precipitation during the super interglacials were about 4 to 5 degrees C warmer, and about 12 inches wetter, than during normal interglacials.

The super interglacial climates suggest that it's nearly impossible for Greenland's ice sheet to have existed in its present form at those times.

Simulations using a state-of-the-art climate model show that the high temperature and precipitation during the super interglacials can't be explained by Earth's orbital parameters or variations in atmospheric greenhouse gases alone, which geologists usually see as driving the glacial/interglacial pattern during ice ages.

That suggests that additional climate feedbacks are at work.

"Improving climate models means that they will better match the data that has been collected," says Paul Filmer, program director in NSF's Division of Earth Sciences, which funded the "Lake E" project along with NSF's Office of Polar Programs.

"The results of this collaboration among scientists in the U.S., Austria, Germany and Russia are providing a challenge for researchers working on climate models: they now need to match results from Antarctica, Greenland--and Lake El'gygytgyn."

Adds Simon Stephenson, director of the Division of Arctic Sciences in NSF's Office of Polar Programs, "This is a significant result from NSF's investment in frontier research during the recent International Polar Year.

The scientists suspect the trigger for intense interglacials might lie in Antarctica.

Earlier work by the international ANDRILL program discovered recurring intervals when the West Antarctic Ice Sheet melted. (ANDRILL, or the ANtarctic geological DRILLing project, is a collaboration of scientists from five nations--Germany, Italy, New Zealand, the United Kingdom and the United States--to recover geologic records from the Antarctic margin.)

The current Lake E study shows that some of these events match with the super interglacials in the Arctic.

The results are of global significance, they believe, demonstrating strong indications of an ongoing collapse of ice shelves around the Antarctic Peninsula and at the margins of the West Antarctica Ice Sheet--and a potential acceleration in the near future.

First, they say, reduced glacial ice cover and loss of ice shelves in Antarctica could have limited formation of cold bottom water masses that flow into the North Pacific Ocean and upwell to the surface, resulting in warmer surface waters, higher temperatures and increased precipitation on land.

Alternatively, disintegration of the West Antarctic Ice Sheet may have led to significant global sea level rise and allowed more warm surface water to reach the Arctic Ocean through the Bering Strait.

Lake E's past, say the researchers, could be the key to our global climate future.

The El'gygytgyn Drilling Project also was funded by the International Continental Scientific Drilling Program (ICDP), the German Federal Ministry for Education and Research, Alfred Wegener Institute, GeoForschungsZentrum-Potsdam, the Russian Academy of Sciences Far East Branch, the Russian Foundation for Basic Research, and the Austrian Ministry for Science and Research.