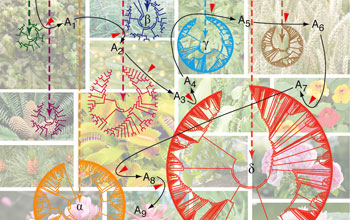 "Plants produce a repository of structurally diverse chemicals ..." That's how a new paper begins that proposes some provocative ideas about how plants developed the wide assortment of chemicals they use to sustain life and how they developed other chemicals that may or may not contribute to their immediate survival, but instead often ensure reproductive success in changing, earth environments.

In a June 29 journal Science review paper, Joseph P. Noel, a lead investigator at the Salk Institute for Biological Studies and the Howard Hughes Medical Institute, and colleagues speculate that plant chemodiversity results from rapid and sometimes unanticipated evolutionary steps.

Noel, along with Jing-Ke Weng and Ryan Philippe also with the Salk Institute, theorize that a very early form of chemical reactions that occurred in the prebiotic soup paved the way for production of chemicals important to the survival of the earliest cellular organisms--chemicals including those essential for building nucleic acids--biological molecules such as DNA, RNA and proteins necessary for encoding, transmitting and expressing genetic information.

The researchers speculate these chemical processes, now catalytically robust, evolved into separate pathways both in early plants and in their aquatic ancestors.

The other pathway produced chemicals that no longer carry life sustaining functions. Instead, these chemicals have more subtle effects on plants' fitness, or reproductive success in their local environments.

In the paper, the researchers hypothesize these secondary chemical processes arose from the more conserved, life-sustaining processes and term them "specialized metabolism."

"Understanding how plants evolved their ability to synthesize secondary metabolites--such a vast and diverse array of chemicals--is a challenging problem," said Parag Chitnis, director of NSF's Division of Molecular & Cellular Biosciences, which funded Noel's research. "In this article, Dr. Noel and his colleagues present an attractive and plausible explanation."

According to the researchers, specialized metabolism likely permitted more and varied chemical reactions and natural products because the enzymes responsible for their synthesis were more flexible in ways scientists are only now beginning to understand at the molecular level.

The upshot was the emergence of secondary chemical reactions that produce color in flowers; rubber for vehicle tires; flavor, smells, nutrition and browning in fruits and wine; natural plant antibiotics; fragrances to attract pollinators and repel herbivores, and even the characteristic aroma and flavor of the cabbage and tomato families.

"Plant secondary metabolism generates a huge diversity of chemicals that are not only very important to the plant, but also for humans," said Greg Warr, a program manager in NSF's Division of Molecular & Cellular Biosciences. "For example, we often depend on plant products for nutrition, fuel, biorenewable chemicals, clothing, shelter and pharmaceuticals."

What's more, Noel and colleagues speculate the depth of specialized metabolism likely mirrored the takeover of Earth by plants that form the essential core of the global food network. As primary metabolism produced life-sustaining chemical reactions, specialized metabolism gave rise to secondary chemical reactions that allowed plants to adapt to geographically dispersed environments, many of which are challenging to other forms of life.

For example, some metabolites, plant hormones regulate various aspects of plant growth and development in response to environmental cues, while others act as ultraviolet sunscreens and prevent dehydration.

"The ability of these complex biological systems in plants to evolve quickly to solve problems of plant survival and reproduction, will ultimately teach us the lessons learned over a 500 million year old experiment plants have been conducting since the dawn of terrestrial life," said Noel.

"Without this ongoing experiment, humankind and all the animal life we know of on the terrestrial earth would cease to exist."

The researchers hope the Science review paper will help provide a provocative and more informed set of hypotheses regarding the amazing tapestry of plant chemistry while also posing still unanswered but fundamental problems to life. "It will certainly guide future research in this important area," said Chitnis.