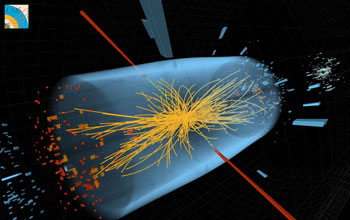 Typical candidate event from the Compact Muon Solenoid Experiment in the search for the Higgs boson.

Physicists on experiments at the Large Hadron Collider have oberved a new particle that future analysis may show to be the long-sought Higgs boson, the missing piece in the Standard Model of particle physics.

Last December, the CMS and ATLAS experiments announced seeing tantalizing hints of a new particle in their hunt for the Higgs. Since then, they have more than doubled their collected data, which has led to today's announcement. Involved in this international effort were more than 1,700 scientists, engineers, technicians and graduate students from U.S. institutions, who helped design, build and operate the LHC accelerator and its four particle detectors.

Scientists on experiments at the LHC announced their latest results at a seminar at the home of the LHC, the CERN laboratory, on the border of Switzerland and France. Physicists from across the United States gathered at laboratories and universities in the middle of the night to watch a live-stream of the seminar online. Scientists will give more detailed presentations about the results this week at the biannual International Conference on High Energy Physics, held this year in Melbourne, Australia.

"What has been announced today could not have been accomplished without the cooperation of scientists and nations throughout the world in seeking an understanding of the fundamental laws of nature," said Ed Seidel, NSF's assistant director for the Mathematical and Physical Sciences. "If the particle announced today at CERN is confirmed to be the Higgs boson, this represents a keystone in our knowledge of the elementary forces and particles that exist in our universe."

Through more than four decades of experimental tests, researchers have found that the Standard Model of particle physics has correctly predicted and explained the elementary particles and forces of nature. But the Standard Model cannot, without the Higgs boson, explain how most of these particles acquire their mass, a key ingredient in the formation of our universe.

In 1964 scientists proposed the existence of a new particle, now known as the Higgs boson, whose coupling with other particles would determine their mass. Many experiments have searched for the Higgs boson, but it has eluded detection. Only now, after decades of developments in accelerator and detector technology and computing--not to mention advancements in the understanding of the rest of the Standard Model--are scientists approaching the moment of knowing whether the Higgs was the right solution to this problem.

"Up until now, we've been guided by theory," said University of California Santa Barbara physicist Joe Incandela, spokesperson of the CMS experiment. "If we start to see something in our experiment, we have a new guide. It's nature. It's the real thing."

When protons collide in the Large Hadron Collider, their energy can convert into mass, often creating short-lived particles. These particles quickly decay into lighter, more stable particles that scientists can record with their detectors.

Theoretical physicists have predicted the rate at which the Higgs boson will be produced in high energy proton-proton collisions at the LHC, and also how it decays into certain combinations of observable particles. Experimental physicists at ATLAS and CMS have been studying the collisions and have seen evidence of a new particle that decays in a manner consistent with the predictions for the Higgs. They will need to collect more data and run further analysis to determine the properties of the new particle.

"If the Higgs boson is discovered, attention will turn to a new set of important questions," said University of California Irvine physicist Andy Lankford, deputy spokesperson of ATLAS. "Is this new particle a Standard Model Higgs, or is it a variant that indicates new physics and other new particles?"

Discovery of the Higgs--or another new particle--would represent only the first step into a new realm of understanding of the world around us.