Icebreaker will resupply and refuel stations for 2012 to 2013 season 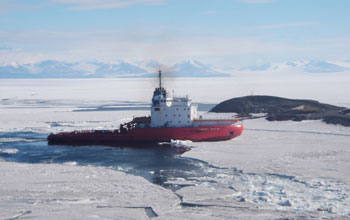 The Russian icebreaker Vladimir Ignatyuk breaking a path in sea ice in Antarctica.

The National Science Foundation (NSF) announced today that it will exercise an option for chartering the diesel icebreaker Vladimir Ignatyuk from Russia's Murmansk Shipping Company. The Ignatyuk will again create a channel through the sea ice of Antarctica's McMurdo Sound needed to resupply and refuel U.S. research stations during the upcoming 2012 to 2013 season.

An icebreaker is essential to create the channel and to safely escort a fuel tanker and cargo ship in and out of McMurdo Station, NSF's logistics hub on the southernmost continent. Amundsen-Scott South Pole Station at the geographic South Pole as well as other field sites are also dependent on the same annual delivery of supplies and fuel to McMurdo.

"We are very pleased to announce this continuation of our agreement with the Murmansk Shipping Company," said Kelly K. Falkner, who heads NSF's Office of Polar Programs, which manages the United States Antarctic Program. "Our recent discussions with them about deploying the Ignatyuk this season have come to a successful conclusion and we are fully confident that the ship will allow us to complete this vital mission."

In August of 2011, NSF signed a one-year fixed contract, with options for renewal, with the Murmansk Shipping Company. The contract provides for using the Canadian-built icebreaker, Vladimir Ignatyuk, to complete the channel-breaking and escort duties.

The Ignatyuk successfully completed the McMurdo Sound break-in and escort in February of 2012. Officials with the Murmansk Shipping Company had subsequently expressed concerns about supporting the mission in 2013. Officials at NSF and the ship's operators are now satisfied that a series of technical discussions have addressed the company's concerns, and arrangements are in place such that the Ignatyuk should be able once again to successfully complete the icebreaking portion of resupply and refueling mission.

Although contingency plans would have kept the U.S. Antarctic Program operating at a reduced level if an icebreaker had not been available, annual refueling and resupply remain critical to NSF's long-term ability to comply with its presidential mandate to maintain "an active and influential national presence" on the southernmost continent.

NSF meets the requirements of Presidential Memorandum 6646 by managing the U.S. Antarctic Program, which supports a comprehensive program of scientific research and operates three year-round research stations; McMurdo, which is on Ross Island, Amundsen-Scott South Pole, and Palmer, which is on the Antarctic Peninsula.

Palmer Station is supplied through a separate logistics stream and was not affected by these discussions.