Science of the Summer Olympics: Engineering in Sports 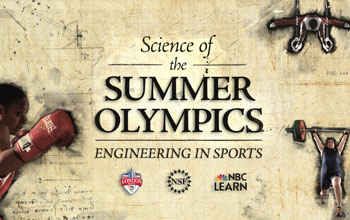 The series delves into the biomechanics of athletes, and how technology builds on human achievement.

The Olympians from Team USA heading to London in July represent not only an American commitment to athletic achievement, but also the pervasive impact of innovation.

From the devices that protect the athletes, to the mechanisms that track their races, to the systems that help them train, technologies created and guided by engineers are critical components of the Olympic experience.

For the London 2012 Olympic Games, the National Science Foundation (NSF), NBC Learn (the educational arm of NBC News) and NBC Olympics, a division of the NBC Sports Group, are launching a series of ten videos highlighting the engineering that is part of the Olympics, as told by top athletes and engineers. Watch all ten videos on the NSF website and on NSF's Science360 website.

Titled Science of the Summer Olympics: Engineering in Sports, the series is a continuation of the Emmy-winning NSF-NBC "Science of ... " partnership.

"The work of engineers not only affects Olympic sports, it also helps us perform ordinary activities in better ways," said Thomas Peterson, NSF assistant director for Engineering. "This series will illustrate how engineers can impact both sports and society, and we hope it will inspire young people to pursue engineering."

Each segment features a top athlete sharing his or her sports experiences, paired with perspectives from leading engineers about the technologies that aid the athletes or the mechanics that explain their craft.

The series also delves into the unique biomechanics of athletes--from the world's fastest man, Usain Bolt, to superheavyweight weightlifter Sarah Robles--and how technology still has much to learn from human achievement.

Each video segment will be available to NBC affiliate stations, and for free on the Web accompanied by an engineering-focused lesson plan for middle- and high-school teachers developed by the National Science Teachers Association.

"The Olympic Games are a time when the world gathers to watch the best athletes compete for gold, and with this new video series, people can see and learn exactly what it takes to reach the top," said Soraya Gage, executive producer of NBC Learn.  "We're thrilled to continue this successful partnership with NSF and NBC Sports, to provide students and teachers with engaging content that makes learning about engineering both relevant and fun."

The segments feature some of the world's top athletes and record holders, including:

Each segment also features engineers from some of the world's top universities and institutions:

The videos are archived on Science360.gov.