NSF invites reporters to participate in a live webcast on citizen science on Tuesday, July 31, at 3:00 p.m. EDT 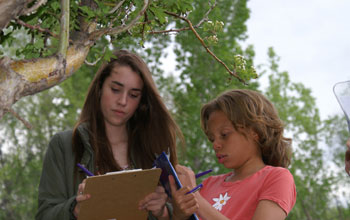 Students collect data on the timing of seasonal changes in plants for Project BudBurst.

View a webcast with David Hanych of the National Science Foundation, Sandra Henderson of NEON, and Henry Reges of the Community Collaborative Rain, Hail & Snow Network.

The increasing prominence of citizen science is being marked by two important "firsts":

The first journal issue exclusively devoted to citizen science: The August 2012 Special Issue of Frontiers in Ecology and the Environment, which is published by the Ecological Society of America (ESA), is titled Citizen Science-New Pathways to Public Involvement in Research and is available for free download starting at 12:01 a.m. on August 1 on the Frontiers website. This issue is funded by the National Science Foundation (NSF).

The first cross-disciplinary conference on citizen science: "A Conference on Public Participation in Scientific Research" will be held on August 4 and 5 in Portland, Ore., in conjunction with ESA's annual meeting. Members of the media interested in attending the conference should contact ESA's press office in advance. Conference co-organizers include NSF's National Ecological Observatory Network (NEON).