Patient is currently stable but may require corrective surgery 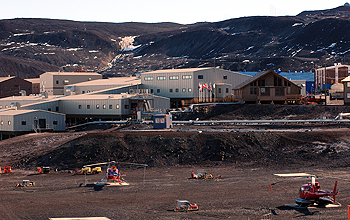 National Science Foundation (NSF) officials have set in motion the necessary steps to airlift a patient from McMurdo Station, one of three year-round stations NSF maintains in Antarctica. The patient's condition may require treatment beyond what can be provided at the station's medical facility.

The patient, whose identity NSF is not releasing, is currently stable but may require immediate corrective surgery best delivered at a more capable facility than is available at McMurdo. The facility at McMurdo is equivalent to an urgent-care center in the U.S., and is not equipped for the type of procedure being contemplated.

As no U.S. aircraft are in a position to respond quickly to the situation, NSF has reached an agreement with the Australian Antarctic Division, which manages Australia's Antarctic research program, to make available an Australian A319 Airbus to fly the patient out. The Royal New Zealand Air Force will provide search-and-rescue coverage for the flight to and from McMurdo Station.

The three nations' Antarctic research programs have existing agreements under which such assets may be shared as needed.

Preparations are underway to ready the ice runway, known as Pegasus, near McMurdo Station for a flight near the end of this week, local time, weather permitting. (U.S. stations in Antarctica keep New Zealand time.). Pegasus is one of only a very few runways in Antarctica that can accommodate wheeled aircraft.

Antarctica is currently emerging from its six-months-long night, so there is a period of twilight at mid-day that could assist pilots in landing on the ice runway.

The evacuation flight comes shortly before a regularly-scheduled series of late winter flights to prepare for the coming Antarctic research season, which gets underway in October.

NSF manages the U.S. Antarctic Program, through which it coordinates all U.S. research and the necessary logistical support on the continent and aboard ships in the Southern Ocean.