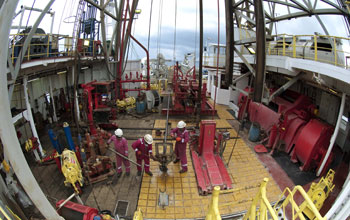 Scientists and engineers at work on the rig floor aboard the drill ship JOIDES Resolution.

Brazil recently joined an international marine research effort to document environmental change by monitoring and sampling the unseen world beneath the sea floor.

The country's inclusion made it the newest of 26 member countries in the Integrated Ocean Drilling Program (IODP).

"We welcome the addition of Brazil's scientists and engineers to IODP at a time when the world needs the knowledge of its researchers," says Rodey Batiza of the U.S. National Science Foundation's Division of Ocean Sciences.

NSF manages the program along with Japan's Ministry of Education, Culture, Sports, Science and Technology.

The first IODP expedition with Brazilian researchers will begin in about six weeks off the coast of Costa Rica. Scientists plan to learn more about the processes that trigger large earthquakes.

The research will take place aboard the drill ship JOIDES Resolution as part of the Costa Rica Seismogenesis Project. Geoscientists will investigate an erosional subduction zone--a zone where Earth's crust is returning to the mantle at an eroding undersea trench.

It's the only known seismogenic zone at an erosional trench that's not too deep for current scientific drilling capabilities. Expedition scientists will work to understand how "unstable slip" is triggered in this zone.

Brazil's membership in IODP will enable recipients of grants through Brazil's "Science Without Frontiers" program to use IODP scientific facilities for their studies. In addition, an organization in Brazil known as Coordination for Improvement of Higher Education Personnel will host IODP's Brazil offices.

According to Batiza, Brazil's participation in IODP will allow Brazilian scientists to work with other international scientists on common problems at the same time--and give U.S. geoscientists, as well as those from other countries, the opportunity to learn from Brazilian researchers.

"Brazil's participation brings new opportunities not only for that country," says Batiza, "but for the global community."

"The most important part of this far-reaching marine geosciences program," he says, "is the first word in its name: integrated. We're all working together to explore the Earth under the sea."

Additional support comes from the European Consortium for Ocean Research Drilling, the Australia-New Zealand IODP Consortium, India's Ministry of Earth Sciences, the People's Republic of China's Ministry of Science and Technology and the Korea Institute of Geoscience and Mineral Resources.

The JOIDES Resolution is a scientific research vessel managed by the U.S. Implementing Organization (USIO) of IODP. Texas A&M University, Lamont-Doherty Earth Observatory of Columbia University, and the Consortium for Ocean Leadership comprise the USIO.