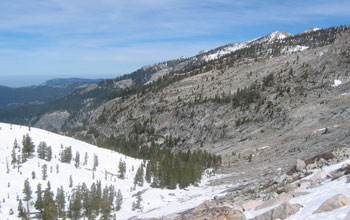 The results show that mid-elevation mountain ecosystems are the most sensitive to rising temperatures and to changes in precipitation and snowmelt.

A paper reporting the results was published yesterday in the journal Nature Geoscience.

"The research demonstrates yet another complexity in the response of mountain ecosystems to increasing temperatures," says hydrologist Tom Torgersen, program director in the National Science Foundation's Division of Earth Sciences, which funded the research. "High-elevation mountain forests are typically temperature-stressed and low-elevation mountain forests are often water-stressed.

The ability to identify this "tipping point" is important, Molotch says, because mid-level forests--at altitudes from roughly 6,500 feet to 8,000 feet--are where many people live and visit. They're also linked with increasing wildfires, beetle outbreaks and rising tree mortality.

Although the research took place in the Sierra Nevada mountain range in California, it's applicable to other mountain ranges across the West.

Climate studies show that the snowpack in mid-elevation forests in the western United States and other forests around the world has been decreasing over the past 50 years because of regional warming.

"We found that mid-elevation forests show a dramatic sensitivity to snow that fell the previous winter in terms of accumulation and subsequent melt," says Molotch, also a scientist at NASA's Jet Propulsion Laboratory in Pasadena.

"If snowpack declines, forests become more stressed, which can lead to ecological changes in the distribution and abundance of plant and animal species, and to more vulnerability to fires and to beetle kill."

Molotch says that about 50 percent of the greenness seen by satellites in mid-elevation forests is linked with maximum snow accumulation from the previous winter, with the other 50 percent related to soil depth, soil nutrients, temperature and sunlight.

"The strength of the relationship between forest greenness and snowpack from the previous year is very surprising," Molotch says.

The researchers initially set out to identify the various components of drought that lead to vegetation stress.

"We went after mountain snowpacks in the western U.S. because they provide about 60 to 80 percent of the water in high-elevation mountains," says Molotch.

The team used 26 years of continuous data from the Advanced Very High Resolution Radiometer, a space-borne sensor flying on a National Oceanic and Atmospheric Administration satellite, to measure the forest greenness.

The researchers compared it with long-term data from 117 snow stations maintained by the California Cooperative Snow Survey, a consortium of state and federal agencies.

In addition, the scientists used information gathered from "flux towers" in the southern Sierra Nevada mountain range. Instruments on these towers measure the exchanges of carbon dioxide, water vapor and energy between the land and the atmosphere.

Instruments on the towers, which are some 100 feet high, allowed scientists to measure the sensitivity of both mid-level and high-level mountainous regions to both wet and dry years--data that matched up well with the satellite and ground data.

"The implications of this study are profound when you think about the potential for ecological change in mountain environments in the West," says Molotch.

"If we look ahead to the time when climate models are calling for warming and drying conditions, the implication is that forests will be increasingly water-stressed in the future and more vulnerable to fires and insect outbreaks."

In the context of recent forest losses to fire in Colorado and elsewhere, the findings are something that really deserve attention, Molotch says.

"This tipping-point elevation is very likely going to migrate up the mountainsides as climate warms."