Stemming the Tide of Biodiversity Loss on Earth 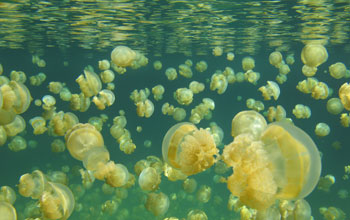 Life on Earth is astounding in its diversity. Despite centuries of discovery, however, the vast majority of the planet's biodiversity remains unknown.

Only a few years ago, scientists shared the view that Earth's biodiversity was so vast that it might be beyond cataloging, much less understanding. That's no longer the case.

To characterize the lesser-known aspects of the diversity of life on Earth, the National Science Foundation has awarded 14 grants totaling $26.4 million in the third year of its Dimensions of Biodiversity program.

NSF's Directorates for Biological Sciences and Geosciences, and Office of International Science and Engineering support the program. Dimensions of Biodiversity is part of NSF's Science, Engineering and Education for Sustainability investment.

The Dimensions program has also formed a partnership with NASA, which co-funds projects that use its remote-sensing platforms. The global importance of biodiversity is reflected in further partnerships with funding agencies in China and Brazil, which support Dimensions collaborators in those countries.

"By establishing networks of interdisciplinary, globally-engaged scientists, the Dimensions of Biodiversity program will have a lasting effect on biodiversity science," says John Wingfield, NSF assistant director for Biological Sciences. "The program has the potential to transform the way we conduct biological research."

This year's awardees will study subjects as diverse as the biota of the Amazon and its environment, how nutrient input drives biodiversity in China's extremely oxygen-deprived--or eutrophic--Lake Taihu, the components of tree biodiversity, and the lineage of species in Hawaii.

"The innovative and interdisciplinary teams of the Dimensions of Biodiversity program may accomplish in 10 years what, with a piecemeal approach, would have taken 50 years--a half-century we can no longer afford to wait," says Joann Roskoski, NSF deputy assistant director for Biological Sciences.

Advances in the ability to collect, analyze and integrate biological data have provided researchers with new tools to expand knowledge of Earth's biodiversity and to revolutionize our understanding of the living world.

The pace of discovery, however, is increasingly offset by the rapid and permanent loss of diversity. Reasons for biodiversity loss include climate change, over-exploitation of natural resources, "planetary re-engineering"--such as land-use change, water diversions, coastal development, fertilizer use--and the intentional or unintentional movements of species such that they become invasive.

With biodiversity loss, humanity is losing links in the web of life that provide ecosystem services, forfeiting opportunities to understand the history and future of the living world and giving up opportunities for future beneficial discoveries in food, fiber, fuel, pharmaceuticals and bio-inspired innovation.

Biodiversity research has often focused on a single dimension. For example, investigators have concentrated on the taxonomic diversity or phylogenetic history of a clade (an ancestor and all its descendants), the genetic diversity of a population or a species, or the functional role of a taxon (a group of one or more populations of organisms) in an ecosystem.

Although this research has yielded important advances, huge gaps exist in our understanding of biodiversity. We know little about how these various dimensions, individually and in concert, contribute to environmental health, ecosystem stability, productivity and resilience, and biological adaptation to rapid environmental change.

By 2020, NSF's Dimensions of Biodiversity program is expected to have transformed our understanding of the scope and role of life on Earth.

NSF's Dimensions of Biodiversity 2012 awardees, their institutions, and projects are:

Joel Cracraft, American Museum of Natural History. Dimensions US-BIOTA-Sao Paulo: Assembly and evolution of the Amazonian biota and its environment: an integrated approach

Angela Douglas, Cornell University. Dimensions: Animal-microbial interactions as an engine of phyletic and functional diversity: insights from interactions between drosophilids and their resident microbiota