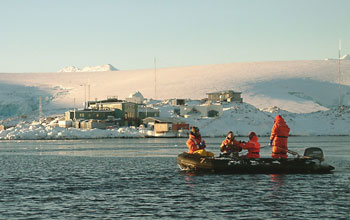 Researchers train in an inflatable boat at NSF's Palmer Station.

Differing contributions of freshwater from glaciers and streams to the Arctic and Southern oceans appear to be responsible for the fact that the majority of microbial communities that thrive near the surface at the Poles share few common members, according to an international team of researchers, some of whom were supported by the National Science Foundation (NSF).

In a paper published in the Oct. 8 edition of the Proceedings of the National Academy of Sciences (PNAS), the researchers report that only 25 percent of the taxonomic groups identified by genetic sequencing that are found at the surface of these waters are common between the two polar oceans. The differences were not as pronounced among microbes deeper in the oceans, with a 40 percent commonality for those populations.

The findings were produced by research supported by NSF during the International Polar Year 2007-2009 (IPY), a global scientific deployment that involved scientists from more than 60 nations. NSF was the lead U.S. agency for the IPY.

"Some of the DNA samples were collected during "Oden Southern Ocean 2007-2008," a unique collaborative effort between NSF's Office of Polar Programs and the Swedish Polar Research Secretariat to perform oceanographic research in the difficult-to-reach and poorly studied Amundsen Sea," said Patricia Yager, a researcher at the University of Georgia and a co-author on the paper.

The Oden cruise was among the first IPY deployments. In addition, some of the samples used in the research were gathered as part of NSF's Life in Extreme Environments Program.

The Polar regions often are described as being, in many ways, mirror images of one another--the Arctic being a ocean surrounded by continental landmasses, while Antarctica is a continent surrounded by an ocean--but the new findings add a biological nuance to those comparisons.

"We believe that differences in environmental conditions at the poles and different selection mechanisms were at play in controlling surface and deep ocean community structure between polar oceans," said Alison Murray of the Desert Research Institute in Reno, Nev., and a co-author on the PNAS paper. "Not surprisingly, the Southern and Arctic oceans are nearest neighbors to each other when compared with communities from lower latitude oceans."

One of the most notable differences in environmental conditions between the two polar oceans is freshwater input. In the Southern Ocean, glacial melt water accounts for most of the freshwater that flows into the systems. In contrast, the Arctic Ocean receives much bigger pulses of freshwater from several large river systems with huge continental drainage basins, in addition to glacial melt water.

The group found that the differences between the poles were most pronounced in the microbial communities sampled from the coastal regions. "This likely is a result of the significant differences in freshwater sourcing to the two polar oceans," said Jean-François Ghiglione, lead author of the article and professor at the Observatoire Océanologique in Banyuls-Sur-Mer, France.

While the surface microbial communities appear to be dominated by environmental selection, such as through the freshwater inputs, the deep communities are more constrained by historical events and connected through oceanic circulation, providing evidence for biogeographically defined communities in the global ocean, according to the authors.

The team compared 20 samples from the Southern Ocean and 24 from the Arctic from both surface and deep waters. They also included an additional 48 samples from lower latitudes to investigate the polar signal in global marine bacterial biogeography.

The researchers specifically compared samples from coastal and open oceans and between winter and summer, to test whether or how environmental conditions and dispersal patterns shape communities in the polar oceans. Samples were processed and analyzed using an identical approach, based on a special technique of DNA sequencing called pyrosequencing, involving more than 800,000 sequences from the 92 samples.

"Our analyses identified a number of key organisms in both poles in the surface and deep ocean waters that are important in driving the differences between the communities," Murray said. "Further research is needed to address the ecological and evolutionary processes underlying these patterns."

The collaborative research was the result of an international effort coordinated by Murray, that involved national polar research programs from six countries--Canada, France, New Zealand, Spain, Sweden and the United States. Support for the work also came from the Sloan Foundation's Census of Marine Life program, which stimulated field efforts at both poles and a separate program targeting marine microbes, the International Census of Marine Microbes, that developed the approach and conducted the sequencing effort.

"The collective energies required to bring this study to fruition were remarkable," Murray said. "Through using similar strategies and technologies from sample collection through next- generation sequencing, we have a highly comparable, unprecedented dataset that for the first time has really allowed us to look in depth across a relatively large number of samples into the similarities of the microbial communities between the two polar oceans."