R/V Sikuliaq will support marine research in the Arctic 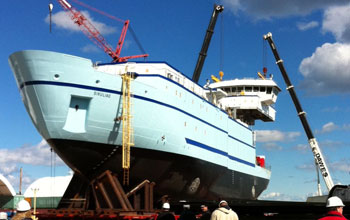 The R/V Sikuliaq will be operated for NSF by the University of Alaska, Fairbanks.

For high definition b-roll of the ship and construction, please contact Dena Headlee at dheadlee@nsf.gov. Watch this video to learn more about the R/V Sikuliaq.

The National Science Foundation (NSF), in cooperation  with the Marinette Marine Corporation (MMC) and the University of Alaska, Fairbanks (UAF) today successfully launched the R/V Sikuliaq (pronounced see-KOO-lee-ack), a "next-generation" global class research vessel. MMC is the Wisconsin shipyard that built the ship with funding provided by NSF through the American Recovery and Reinvestment Act. UAF's School of Fisheries and Ocean Sciences will operate the ship as part of the U.S. academic research fleet.

"R/V Sikuliaq is one of the most advanced research vessels in the world," said NSF Director Subra Suresh. "Its capabilities to operate in extreme ecosystems will serve the science and engineering research communities for decades to come, while providing opportunities for educators and students to learn first-hand about the Arctic environment."

Although this 261-foot, general-purpose ship has a hull specifically designed to operate in Arctic sea ice and the open waters surrounding Alaska, it can work effectively throughout the world's oceans. It will support roughly 500 researchers and students annually and spend up to 270 days per year at sea. It is accessible to persons with disabilities. Sikuliaq will allow researchers to work in ice-covered waters not previously accessible on a routine basis, and play an essential role in our understanding of the Arctic Ocean system and how it is changing over time.

The vessel will be uniquely equipped for operating in ice-covered waters, with a reinforced double hull, two rotating thrusters, and scalloped propeller blades enabling it to break through first-year ice up to 2.5 feet thick. The ship will also be outfitted with the latest technology for marine research, including a low underwater noise signature, advanced communications, acoustic sensors and advanced scientific equipment handling systems.

Sikuliaq will depart on its first science mission in early 2014. The ship will be home ported at UAF's Seward Marine Center in Seward, Alaska.