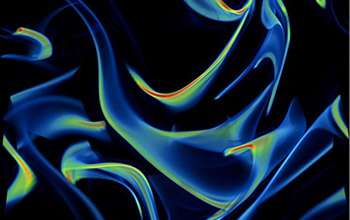 Study provides insight into how small organisms, such as bacteria, interact with their environment.

New research shows that ocean turbulence directly affects the ability of microscopic marine organisms to recycle organic material back into the food web.

Scientists John Taylor of Cambridge University and Roman Stocker at MIT found that there's a relationship between the natural movement of water in the ocean and the ability of marine bacteria to act as recyclers.

"The research provides a unique insight into how small organisms, such as bacteria, interact with their environment," says biological oceanographer David Garrison of the National Science Foundation's Division of Ocean Sciences, which funded the research.

"The results will lead to a better understanding of microbial dynamics and nutrient cycling in nature."

The movement of seawater--including small whirls and eddies--affects how marine bacteria absorb organic material, such as that produced by phytoplankton.

In the process of generating oxygen, phytoplankton produce waste matter in the form of organic material, some of which becomes dissolved in seawater.

This dissolved organic material is then absorbed by marine bacteria foraging for food. Bacteria are then consumed by larger organisms.

The organic waste material excreted by phytoplankton becomes part of the microbial loop - and contributes to the functioning of the marine food web.

Taylor's and Stocker's research revealed that a delicate balance exists between the extent of water turbulence and the recycling activity of bacteria--with high and low levels of turbulence linked to lower recycling rates.

Their study also looked at how the physical environment of the ocean might help to select the most successful types of marine bacteria, which compete for nutrients.

Some marine bacteria have evolved the ability to swim. Swimming bacteria, known as motile bacteria, have advantages over non-swimming species in foraging for food.

However, swimming is energy-intensive so motile bacteria swim only when it is worth the effort in terms of pay-back.

Some bacteria can also detect and respond to chemicals dissolved in the surrounding water, an ability known as chemotaxis.

The researchers compared the activity of motile and non-motile bacteria across environments that differed in levels of water movement and nutrient availability.

All water moves, but the extent of its turbulence varies widely in the ocean.

Wind and waves strongly churn the water near the surface, while the level of turbulence is much lower in the deep ocean, says Stocker.

The results show that the organic matter excreted by phytoplankton is patchy in the ocean, and is not as uniform as had been thought.

Organic matter enters water in bursts, after which a natural mixing and stirring action comes into play and the organic matter is dispersed.

The patterns of dispersal depend on the strength of turbulence and the extent of stirring and mixing.

"When you pour cream into coffee and stir it carefully, you get swirls of cream," says Taylor.

"If you mix cream into your coffee vigorously, it quickly becomes evenly dispersed. When this happens in the ocean, the swimming bacteria have less to gain in seeking out the thinly-dispersed organic matter."

Bacteria get energy from organic matter--but they also expend energy in swimming.

"Our research suggests that the optimum environment is one of intermediate turbulence intensity--when bursts of organic matter are stirred into thin filaments that can be exploited by large numbers of bacteria," says Taylor.

"The best environment for motile bacteria is one in which the organic matter is lightly stirred into the water rather than vigorously mixed."