Where Have Our Winters Gone? 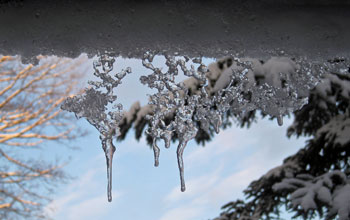 Winter as we know it: is it going, going...gone?

If you're planning to skate on a frozen lake or river this winter, ski on a snowy slope, or, when spring arrives, depend on snowmelt to refill your water supply, you may need to think twice.

Winter as a "species" may have evolved to be less like the winters we remember. The change has consequences for summer, too, including plants' flowering times.

Scientists will present results on how winter is changing and why it matters at the American Geophysical Union (AGU) conference, taking place in San Francisco from Dec. 3 to 7, 2012.

The National Science Foundation (NSF) funded much of the research results being presented at the session.

Other presentations will look at insects, fires and climate change: implications for snow cover, water resources and ecosystem recovery in western North America; climate effects on groundwater storage, hydrochemistry and residence time in geologically variable, snowmelt-dominated mountain catchments in Colorado's Front Range; and the response of aboveground plant productivity to earlier snowmelt and summer warming in an arctic ecosystem.

"Wherever winter occurs, it is likely changing now or projected to change in the future," says Steltzer. "That will affect us all."

Among the session's highlights are talks on snowmelt-dependent water supplies, and mountain ecosystems out of sync.

"More than 80 percent of sunlight falling on fresh snow is reflected back to space," says atmospheric scientist Tom Painter of the Jet Propulsion Laboratory in Pasadena, Calif., and the University of California at Los Angeles. "But sprinkle some dark particles on the snow and that number drops dramatically."

The darker dust absorbs sunlight, reducing the amount of reflected light and in turn warming the now "dirty" snow surface.

When the winds are right and the desert is dry, dust blows eastward from the semi-arid regions of the U.S. Southwest. In a dust-up, Western style, small dark particles fall on the mountains' white snowfields, ultimately affecting the entire Colorado River watershed.

While dust has always blown into these mountains, the expansion of grazing and other disturbances in the western U.S. in the mid- to late-1800s led to a five- to seven-fold increase in dust loading. The snow cover became darker and lasted for shorter and shorter periods.

Lee's Ferry, Ariz., is the dividing line between the upper and lower Colorado River Basins.

There, according to Painter, peak spring runoff from the Colorado River occurs an average of three weeks earlier due to the more recent five-fold increase in such dust.

With this effect, total annual runoff at Lee's Ferry--and the Colorado River Basin as a whole--has been reduced by about five percent per year.

"This research lays the foundation for future sound water-resource management of a river that serves 27 million people," says Anjuli Bamzai, program director in NSF's Division of Atmospheric and Geospace Sciences, which funded the research.

Runoff from the Colorado River Basin has decreased by more than 35 billion cubic feet due to airborne dust, according to Painter.

"Lake sediments in the mountains indicate that the increased dust load came after the vast increases in grazing and agriculture in the deserts of the southwest U.S. in the late 1800s."

The snow cover, Painter says, is therefore much darker in spring than it was at that time, and melts away several weeks earlier.

"Runoff comes from the mountains in a more compressed period, which makes water management more difficult than if the water came more slowly out of the mountains."

More focus on reducing dust could be effective, says Painter, "and in turn sustain the mountain reservoir system of snow cover, potentially increase runoff, and counter the regional effects of climate change."

If changes are made in the way desert soils are managed and dust emission is reduced, he says, it could ease tensions over water in the entire Colorado River Basin.

The glacier lily, a tall, willowy plant that graces mountain meadows throughout western North America, flowers early in spring, when the first bumblebees and hummingbirds appear.

The lily, a plant that grows best on subalpine slopes, is fast becoming a hothouse flower. In Earth's warming temperatures, its first blooms appear some 17 days earlier than they did in the 1970s, ecologist David Inouye of the University of Maryland has found.

The problem is that the glacier lily is no longer synchronized with the arrival of broad-tailed hummingbirds, which depend on the lilies' flowers for nectar.

By the time hummingbirds fly in, says Inouye, many of the flowers have withered away, taking their nectar-laden blooms with them.

"Climate change is disrupting the careful match between organisms and their environments," she says. "The ecological communities of today are dramatically different than those of the past."

Biologists calculate that if current trends continue, in two decades the hummingbirds will miss the first flowers entirely.

"In Arizona, for example," says Inouye, "there's no obvious narrowing of the timing between the first arriving males and the first blooms of, in that case, the nectar-containing Indian paintbrush."

Higher latitudes may be more likely to become out of sync ecologically because global warming is happening fastest there.

As snows continue to melt earlier in spring, bringing earlier flowering, the mountains may come alive with glacier lilies long before hummingbirds can complete their journey north.