For team of neurosurgeons and researchers, CAVE2 ™ is a tool that could revolutionize stroke prevention and treatment 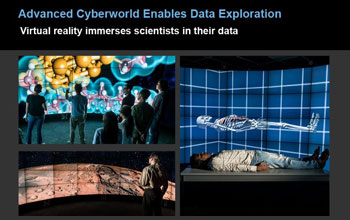 An image gallery on CAVE2: the virtual reality system in action

What happens when a team of neurosurgeons, university professors, architects, students and engineers stands in front of an 8-foot-high theater screen with a 320-degree, immersive, 3-D view of their data? Cutting-edge science happens, and some are astonished by what is revealed.

A team of neurosurgeons from the College of Medicine at the University of Illinois at Chicago (UIC) recently stepped into CAVE2--a next-generation, large-scale, virtual environment--to solve a vexing problem that presented itself in the arteries of the brain of a real patient. The method they used could someday benefit hundreds of thousands of Americans who fall victim to brain aneurysms and strokes, the third leading cause of death in the United States.

"We were flabbergasted," said Andreas Linninger, professor of bioengineering and lead researcher of a project that measures and models blood flow in the brains of patients with stroke.

For years, Linninger and neurosurgeons had painstakingly used laptop and desktop computers to evaluate patient-specific images, which had been interpreted by computer algorithms to represent the brain and its blood flow in 3-D. They pieced together arteries, veins and micro-vessels to create three-dimensional, full-brain models that physiologically mirrored the brains of individual patients, including a particular patient whose cerebrovascular system they were trying to accurately model.

But because of the limited image spatial-resolution of even today's best-quality laptop and desktop computers, there was something the neurosurgeons couldn't see. That is, until they stepped into an automatic virtual environment, also known as a "CAVE"--a room in which images are seamlessly displayed so as to immerse an observer in a cyber world of 3-D data.

"We had been looking at computer models of a particular patient's brain for several months," said Linninger, "but within five minutes of putting the model into the CAVE2, the chief endovascologist said we had connected certain arteries in a way that was inconsistent with anatomy." With that revelation, their model could be corrected.

The use of UIC's virtual reality system to make the discovery could help change the way surgeons are trained and greatly improve patient care. Without CAVE2's ability to electronically immerse these researchers and surgeons in their data, they may have still missed this significant data point and continued to struggle with developing an accurate model.

"Today, almost all science is e-science," said Jason Leigh, director of the UIC's Electronic Visualization Laboratory (EVL). "Much of the data scientists investigate is collected, stored and analyzed digitally. CAVE2 gives us a unique ability to take that data and represent it in a large-scale virtual environment."

CAVE2 combines the benefits of scalable-resolution display walls and virtual-reality systems to create a seamless 2-D and 3-D environment. It allows scientists to study phenomena too large, too small, too dangerous, too complex or too distant to truly understand well without some help in perceptual augmentation. It provides a virtual reality in which researchers can be immersed in their data to gain new understanding.

Once inside CAVE2, observers can adopt a scale, relative to the visual model, that makes them feel larger than a six-story building or smaller than a molecule, for example. This ability to zoom in and out of different scales empowers them to make detailed observations and gain new insights and knowledge.

"Scientific phenomena are observed with new types of digital instruments," said Leigh, "including sensors and robotic autonomous exploration vehicles capable of collecting data at ever-increasing resolutions. Natural phenomena from global weather systems to chemical reactions at the atomic level, for instance, may now be simulated inside supercomputers, generating massive amounts of data."

CAVE2 is being developed by EVL with funding from the National Science Foundation (NSF), made possible by the American Recovery and Reinvestment Act.

The original CAVE, also supported by NSF, was a virtual-reality room with stereoscopic 3-D computer graphics rear-projected onto the walls and down-projected onto the floor. The change in technology and capabilities from the first CAVE to CAVE2 during the last 20 years has been dramatic.

"CAVE2 is the culmination of the lab's 20-plus years of expertise in virtual-reality and in large-scale displays," said EVL computer science faculty member Andrew Johnson.

What's more, with all these improvements, CAVE2 costs less to build--almost half as much as the first CAVE system, which cost some $2 million in today's dollars.

For Linninger, CAVE2 technology could prove invaluable, increasing understanding of blood flow in individual patients and helping to prevent and treat aneurysms and strokes, which claim the lives of hundreds of thousands of Americans every year.

"I think the CAVE2 is an enabling technology that modern, scientific, data-driven medicine requires," he said. "For me, it's essential to work with the EVL people and CAVE2 to maximize the learning effect from our very massively data-driven, biomedical research."

CAVE2 debuted in early October with demonstrations performed in cooperation with Chicago Ideas Week, the 12th Annual Global LambdaGrid Workshop and the UIC College of Engineering's Industrial Advisory Board.

NSF's Major Research Instrumentation program and the Department of Energy fund CAVE2. CAVE and CAVE2 are trademarks of the University of Illinois Board of Trustees.