Atop an Antarctic Volcano, NSF-funded Researcher Finds Camp Site from the "Heroic Age" of Antarctic Exploration

Find comes almost exactly a century after site was abandoned 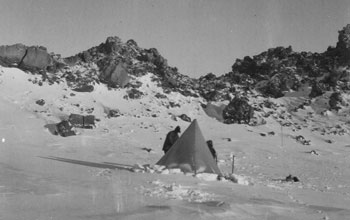 A National Science Foundation-funded research team working on the slopes of the world’s southernmost active volcano appears to have found the remains of a camp used by explorers of the so-called “Heroic Age” of Antarctic exploration, a century after the camp was abandoned.

Although photos of the site, known as “the highest camp”, appear to match an archival photograph taken by members of the 1912 Terra Nova expedition led by Royal Navy Captain Robert F. Scott, conservators from the New Zealand-based Antarctic Heritage Trust have been asked to verify the historic find.

The find comes in the closing days of the centennial of the so-called “Race to the Pole” between Scott and Norwegian Roald Amundsen. Amundsen reached the geographic South Pole on Dec. 14, 1911, five weeks before Scott’s party. In the tragic finish to the race, Scott and his men perished on the ice on their return trip, only a few miles from safety.

A ring of stones, where a tent once stood in what may have been a Terra Nova campsite, was discovered by Clive Oppenheimer, a volcanologist at Cambridge University in the United Kingdom. Oppenheimer is working on Mt. Erebus, a 14,500-foot, ice-covered volcano, as part of a team of NSF supported researchers led by Phillip Kyle of the New Mexico Institute of Mining and Technology.

With support from NSF, Kyle has been studying Mt. Erebus for decades. The volcano is unique in the world, not only because of its location, but also because of other features, notably a lake of lava deep in the ice-covered crater.

Oppenheimer is the first known visitor to the site since Scott's men left. He found it using a combination of written accounts and historic images from the Scott Polar Research Institute in Great Britain, which was founded by one of the party that climbed the volcano in 1912.

Although Oppenheimer is working on Erebus as a member of a team supported by the U.S. Antarctic Program, which is managed by NSF, he found the site during a break in the research work.

NSF is taking steps, along with international partners New Zealand and the U.K., to insure that the archeological value of the site is maintained.

A survey will record the area and search for items that may have been left behind in 1912.

A number of the Heroic Age huts used by explorers such as Scott and Sir Ernest Shackleton in the early years of the 20th century, have similarly been preserved and contain a wide range of artifacts--from scientific equipment to expedition supplies--that have been extraordinarily well preserved by the extremely cold and dry Antarctic climate.

Records show that a camp was erected in 1912 by a team from the shore party of the Terra Nova Expedition that climbed Mt. Erebus. This was the second group to examine the summit region of Mt Erebus. A group from Shackleton’s Nimrod Expedition (1907-1909), including famed Australian geologist Sir Douglas Mawson, was the first to climb Erebus and observe the active lava lake in 1908.

Philippe Foster Back, granddaughter of Frank Debenham and chair of the United Kingdom Antarctic Heritage Trust, said "Clive Oppenheimer's location of the original 'highest camp' is a wonderful addition to all the activity which has taken place throughout 2012 to mark the centenary of Captain Scott's expedition. It is a reminder of both the dangers and thrills of Antarctic science and a fitting tribute to the great legacies of exploration and discovery left to us by all the brave men of that party."