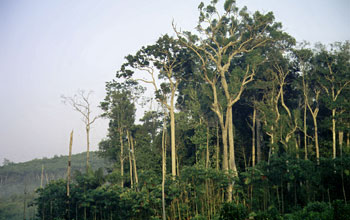 Fragment of mature Amazon forest within an agricultural area near Manaus, Brazil.

The analysis also reveals that these surprisingly old species have endured past periods of significant climate warming. It therefore appears unlikely that human-caused temperature increases alone will cause mass extinctions of the trees in the coming century.

Results of a study by evolutionary biologist Christopher Dick of the University of Michigan and colleagues show that some trees in the Amazon rainforest have survived warm periods similar to the global warming scenarios forecast for the year 2100.

"In the absence of other major environmental changes, near-term high-temperature-induced mass species extinction is unlikely" in the Amazon forest, Dick and colleagues conclude in a paper published online today in the journal Ecology and Evolution.

"The rapidly changing climate of our planet has the potential to put great stresses on plants and animals," said Sam Scheiner, program director in the National Science Foundation's (NSF) Division of Environmental Biology, which funded the research.

"To prepare for these changes, we need to know how species have adapted to past climate change," Scheiner said. "Much more is left to be learned about the effects of climate change."

The new results are at odds with earlier findings based on ecological niche-modeling scenarios that predict tree species extinctions in response to relatively small increases in global average air temperatures.

Then he and other scientists looked at climate events that have occurred since those tree species emerged. In general, the older the tree species, the warmer the climate it has previously survived.

"These are surprisingly old ages," Dick said. "Previous studies have suggested that a majority of Amazon tree species may have originated during the Quaternary Period, from 2.6 million years ago to the present."

"The most lasting finding of our study may be the discovery of ancient geographic variation within widespread species, indicating that many rainforest tree species were widely distributed before the major uplift of the northern Andes," said paper co-author Eldredge Bermingham of the Smithsonian Tropical Research Institute.

Air temperatures 5.3 to 11.5 million years ago in the late Miocene Epoch were about the same as IPCC projections for the region in 2100 using the highest carbon-emission scenarios.

Paper co-author Simon Lewis of University College London and the University of Leeds cautioned that the good news for Amazon trees is not a panacea.

"The past cannot be compared directly with the future," he said.

"While tree species seem likely to tolerate higher air temperatures than today, the Amazon forest is being converted for agriculture and mining, and what remains is being fragmented by roads and fields.

"Species will not move as freely in the Amazon as they did in previous warm periods, when there was no human influence. Today's climate change is extremely fast, making comparisons with the past difficult."

The 12 tree species used in the study are broadly representative of the Amazon tree flora.

Other plant samples were obtained from herbarium specimens.

To determine the age of each tree species, the researchers extracted and sequenced DNA from plant samples, then looked at the number of genetic mutations contained in those sequences.

Using a molecular clock approach and population genetic models, they estimated how long it would take for each of the tree populations to accumulate the observed number of mutations, which provided a minimum age for each species.

Tropical rainforests have existed in South America for at least 55 million years.

The future of the contemporary Amazon forest is uncertain, however, as the region is entering conditions with no past analog, combining rapidly increasing air temperatures, high atmospheric carbon dioxide concentrations, possible extreme droughts and extensive removal and modification of the forest by humans.

The findings imply that droughts, direct human effects and their interactions "may be more immediate threats to the integrity of Amazon rainforests, and should remain a focus of conservation policy," the authors conclude.

"An important caveat is that because we've been in a cold period over the past 2 million years--basically the whole Quaternary Period--some of the trees' adaptations to warmth tolerance may have been lost," Dick said.

In addition to Dick, Bermingham and Lewis, Mark Maslin of University College London is a co-author of the paper.

Additional support for the research was provided by the Smithsonian Tropical Research Institute, the University of Michigan and the Royal Society.