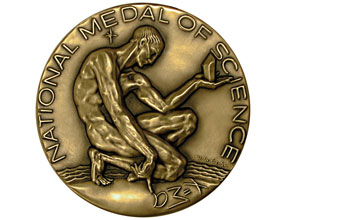 "I am proud to honor these inspiring American innovators," Obama said when the awardees were announced. "They represent the ingenuity and imagination that has long made this nation great--and they remind us of the enormous impact a few good ideas can have when these creative qualities are unleashed in an entrepreneurial environment."

"Your discoveries and innovation nourish the prosperity, security and well-being of our country, and they will provide inspiration for future ground-breaking work by scientists and innovators for generations to come," said NSF Director Subra Suresh. "I thank you on behalf of NSF and a proud nation."

The president spoke of the importance of "lending a hand" to promising scientists and engineers so that they may pursue research and contribute to their fields.

Among this year's 12 recipients of the National Medal of Science, 92 percent have received NSF support at some point in their research careers, for a cumulative support of over $60 million.

A committee of 12 scientists and engineers is appointed by the president to evaluate the nominees for the award. Since its establishment, the National Medal of Science has been awarded to 468 distinguished scientists and engineers whose careers spanned decades of research and development. The recipients database, with information from 1962 to the present, is searchable by name, affiliation and other criteria.

Allen J. Bard - The University of Texas at Austin

Chemist Allen Bard, has spent his entire career at the University of Texas at Austin. He joined the faculty in 1958 and has served as the Hackerman-Welch Regents Chair in Chemistry since 1985. His publications include three books, more than 800 peer-reviewed research papers and 75 book chapters. He has received more than 23 patents and has served as editor-in-chief of the Journal of the American Chemical Society for nearly two decades.

For contributions to the discovery and understanding of the dominant photosynthetic organisms in the ocean, promotion of the field of microbial oceanography and influence on marine policy and management

Biological oceanographer Sallie Chisholm explores microbial ecology, ecological genomics and marine cyanobacteria. Her early research focused on the processes by which marine phytoplankton take up nutrients that affect their growth. Her work led to the discovery that a large part of marine productivity is carried out by extremely small phytoplankton. Unknown until 1988, these tiny microbes are the most abundant photosynthetic cells on Earth, and an essential component of the ocean carbon cycle. Chisholm, who is now the Lee and Geraldine Martin Professor of Environmental Studies and a professor of Biology at MIT, also helps to inform public policy on climate change and the oceans.

For contributions to quantum field theory and quantum chromodynamics, application of science to inform national policies in security and intelligence and distinguished contributions as an advisor to the United States Government

Theoretical physicist and arms control expert Sidney Drell is most notably recognized for his contributions in the Drell-Yan Process, which studies both fixed-target and collider experiments and provides insight for calculating essentially all processes at hadron colliders. He is a professor and deputy director emeritus of the SLAC National Accelerator Laboratory at Stanford, and senior fellow at the Hoover Institution.

For leadership in numerous path-breaking studies of extra-galactic astronomy and galaxy formation and for oversight of the construction of important instruments, including the Keck telescopes

Astronomer Sandra Faber is a professor of astronomy and astrophysics at the University of California Observatories and the Lick Observatory. Her research, which focuses on the formation and evolution of galaxies and the evolution of structures in the universe, has revolutionized the way cosmologists understand and model the universe. She leads a Hubble Space Telescope project designed to give scientists a view of galaxy formation nearly as far back as the Big Bang.

For contributions to the mathematics of supersymmetry in particle, field and string theories and extraordinary efforts to engage the public on the beauty and wonder of fundamental physics

Theoretical physicist Sylvester James Gates Jr. is the John S. Toll Professor of Physics at the University of Maryland, College Park. He serves on the President's Council of Advisors on Science and Technology and has been extensively featured on NOVA PBS programs on physics, notably "The Elegant Universe" in 2003. Committed to making complicated scientific concepts comprehensible to lay people, he completed a DVD series in 2006 titled Superstring Theory: The DNA of Reality and appeared in the 2012 BBC Horizon documentary The Hunt for Higgs.

For pioneering work in shift register sequences that changed the course of communications from analog to digital and for numerous innovations in reliable and secure space, radar, cellular, wireless and spread-spectrum communications

Mathematician and engineer Solomon Wolf Golomb is a professor of electrical engineering at the University of Southern California. Golomb is an expert in satellite communications technology and played a key role in formulating the design of deep-space communications for lunar and planetary explorations. He is best known to the general public and fans of mathematical games as the inventor of polyominoes, the inspiration for the computer game Tetris. He specializes in problems of combinatorial analysis, number theory, coding theory and communications.

John B. Goodenough - The University of Texas at Austin

For groundbreaking cathode research that led to the first commercial lithium ion battery, which has since revolutionized consumer electronics with technical applications for portable and stationary power

Solid-state physicist John Bannister Goodenough is a professor of mechanical engineering and materials science at UT Austin. He is known for developing the Li-ion rechargeable battery, as well as for developing the Goodenough-Kanamori rules for determining the sign of the magnetic superexchange in materials. Although Sony Corporation is responsible for the commercialization of technology for lightweight rechargeable batteries now ubiquitous in today's portable electronic devices, Goodenough is widely credited for its original identification and development.

For highly creative pioneering research in inorganic, organometallic and medicinal boron chemistry, sustained and profound contributions to scientific and technical advice related to national security and for effective, prolific and devoted service to the broad field of chemical sciences

Inorganic chemist M. Frederick Hawthorne is the founding director of the University of Missouri International Institute of Nano and Molecular Medicine, and professor of radiology, chemistry and physics at the University of Missouri, Columbia. He is known for his pioneering work in borane chemistry and in the fields of nano and molecular medicine. Hawthorne research significantly contributed to understanding of the chemistry of boron hydride clusters, of great theoretical importance to the chemistry community. Hawthorne was long associated with the journal Inorganic Chemistry, being the longest serving editor-in-chief.

Biologist Leroy Hood, president and co-founder of the Institute for Systems Biology in Seattle, is recognized as one of the world's leading scientists in molecular biotechnology and genomics. His development of the DNA sequencer, DNA synthesizer and other instruments resulted in the successful mapping of the human genome that revolutionized biomedicine and forensic science. He holds numerous patents and played a role in founding several biotechnology companies. He exhibits a lifelong commitment to making science accessible and understandable to the general public, especially children.

For original and landmark contributions to differential topology, number theory and arithmetic algebraic geometry, where, among other applications, his work was foundational to Wiles' proof of Fermat's Last Theorem and for his dedication to communicating subtle mathematical ideas to the broader public

Lucy Shapiro is the Virginia and D.K. Ludwig Professor of Cancer Research and director of the Beckman Center for Molecular and Genetic Medicine at the Stanford University School of Medicine. In her research, she uses Caulobacter, the model organism for the integrated circuitry that runs a bacterial cell cycle, in the hopes of someday defining the complete genetic circuitry linking cell specification.

Anne Treisman is a psychologist at Princeton University researching visual attention, object perception, conscious awareness and memory. In her career, she proposed ideas that had an enormous impact inside and outside of psychology, including the Feature Integration Theory of attention, which suggests that when perceiving a stimulus, features are "registered early, automatically and in parallel, while objects are identified separately" and at a later stage in processing. Years later, her Feature Integration Theory formed the basis for thousands of experiments in cognitive psychology, vision sciences, cognitive science, neuropsychology and cognitive neuroscience.

Nominations are currently being accepted for next year's National Medal of Science awardees.

The National Medal of Technology and Innovation, also awarded today, was created by statute in 1980 and is administered for the White House by the U.S. Department of Commerce's Patent and Trademark Office. The award recognizes those who have made lasting contributions to America's competitiveness and quality of life and helped strengthen the Nation's technological workforce. Nominees are selected by a distinguished independent committee representing the private and public sectors.

2012 National Medal of Technology and Innovation awardees are: