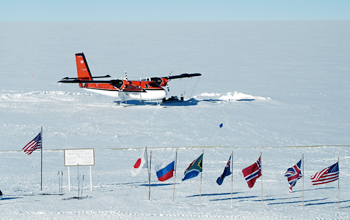 The wreckage of a Twin Otter aircraft that was reported missing earlier this week in Antarctica has been found in a remote and mountainous area of the continent.

An initial assessment by Kenn Borek Air Ltd. of Calgary, Canada, the owner of the plane, deemed the crash "not survivable."

Weather has prevented search-and-rescue personnel from landing at the site.

The National Science Foundation (NSF), as manager of the U.S. Antarctic Program (USAP), has been cooperating with the Rescue Coordination Centre in Wellington, New Zealand, since the search-and-rescue effort to locate the missing aircraft--a de Havilland DHC-6 Twin Otter--began earlier this week.

On the afternoon of Saturday, Jan. 26, local time, a ski-equipped LC-130 aircraft--operated by the New York Air National Guard for the USAP and flying from NSF's McMurdo Station--overflew the last known position from the aircraft emergency beacon and spotted the aircraft tail at an elevation of about 3,900 meters (13,000 feet) on Mt. Elizabeth, a 4,480-meter (14,500-foot) summit in the Queen Alexandra Range of the Transantarctic Mountains.

Later, two helicopters--one under New Zealand charter and the other flown for the USAP by PHI, Inc. of Lafayette, Louisiana--arrived at a small camp established roughly 50 kilometers (31 miles) from the crash location to support the operation.

The rescue teams will attempt to reach the site, if conditions permit, before returning to McMurdo Station.