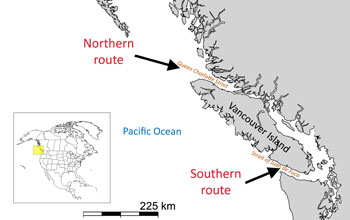 Northern and southern routes lead around Vancouver Island to the Fraser River in British Columbia.

View a video of Nathan Putnam, a post-doctoral researcher at Oregon State University, who is working to solve some of the mysteries of salmon migrations.

When migrating, sockeye salmon typically swim up to 4,000 miles into the ocean and then, years later, navigate back to the upstream reaches of the rivers in which they were born to spawn their young. Scientists, the fishing community and lay people have long wondered how salmon find their way to their home rivers over such epic distances.

How do they do that?

A new study, published in this week's issue of Current Biology and partly funded by the National Science Foundation, suggests that salmon find their home rivers by sensing the rivers' unique magnetic signature.

As part of the study, the research team used data from more than 56 years of catches in salmon fisheries to identify the routes that salmon had taken from their most northerly destinations, which were probably near Alaska or the Aleutian Islands in the Pacific Ocean, to the mouth of their home river--the Fraser River in British Columbia, Canada. This data was compared to the intensity of the Earth's magnetic field at pivotal locations in the salmon's migratory route.

The Earth has a magnetic field that weakens with proximity to the equator and distance from the poles and gradually changes on a yearly basis. Therefore, the intensity of the magnetosphere in any particular location is unique and differs slightly from year to year.

Results from this study showed that the intensity of the magnetic field largely predicted which route the salmon used to detour around Vancouver Island; in any given year, the salmon were more likely to take whichever route had a magnetic signature that most closely matched that of the Fraser River years before, when the salmon initially swam from the river into the Pacific Ocean.

"These results are consistent with the idea that juvenile salmon imprint on (i.e. learn and remember) the magnetic signature of their home river, and then seek that same magnetic signature during their spawning migration," said Nathan Putman, a post-doctoral researcher at Oregon State University and the lead author of the study.

This study provides the first empirical evidence of magnetic imprinting in animals and represents the discovery of a major new phenomenon in behavioral biology.

In addition, this study suggests that it would be possible to forecast salmon movements using geomagnetic models--a development that has important implications for fisheries management.

Get out the map

Putman says scientists don't know exactly how early and how often salmon check the Earth's magnetic field in order to identify their geographic locations during their trip back home. "But," he says, "for the salmon to be able to go from some location out in the middle of the Pacific 4,000 miles away, they need to make a correct migratory choice early--and they need to know which direction to start going in. For that, they would presumably use the magnetic field."

Putman continues, "As the salmon travel that route, ocean currents and other forces might blow them off course. So they would probably need to check their magnetic position several times during this migration to stay on track. Once they get close to the coastline, they would need to hone in on their target, and so would presumably check in more continuously during this stage of their migration."

Putman says that once the salmon reach their home river, they probably use their sense of smell to find the particular tributary in which they were born. However, over long distances, magnetism would be a more useful cue to salmon than odors because magnetism--unlike odors--can be detected across thousands of miles of open ocean.

Like other Pacific Salmon, sockeye salmon spawn in the gravel beds of rivers and streams. After the newly hatched salmon emerge from these beds, they spend one to three years in fresh water, and then they migrate downstream to the ocean.

Next, the salmon travel thousands of miles from their home river to forage in the North Pacific for about two more years, and then, as well-fed adults, they migrate back to the same gravel beds in which they were born.

Salmon usually undertake their taxing, round-trip migration, which may total up to 8,000 miles, only once in their lives; they typically die soon after spawning.

Related Websites
Article about the use of magnetism by sea turtles: http://www.livescience.com/21080-loggerhead-turtle-migration.html
Press release about discovery that sea turtles use magnetism to steer when migrating around the Atlantic basin: http://www.nsf.gov/news/news_summ.jsp?cntn_id=124190