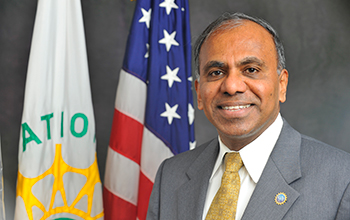 National Science Foundation Director Subra Suresh announced today that he will step down from his current role at NSF at the end of March to accept an appointment as Carnegie Mellon University's ninth president, effective July 1.

In a note to NSF staff distributed this morning, Suresh said, "It has been my extraordinary honor to lead the National Science Foundation, which is blessed with a marvelous cohort of highly talented and devoted staff, as well as hundreds of thousands of innovative grantees and investigators from every field of science and engineering. I am grateful for the opportunity to serve the country in this capacity."

Commenting on Suresh's accomplishments as NSF Director, John Holdren, Assistant to the President for Science and Technology and Director of the White House Office of Science and Technology Policy said, "I want to thank Subra Suresh for his outstanding service as Director of the National Science Foundation. Subra has made critical contributions to a broad range of science and technology priorities, including expanding federal investments in fundamental research, accelerating the commercialization of university research, and strengthening our scientific collaborations with partners around the world. He also leaves a crucially important legacy of having expanded NSF's family-friendly policies, which make it easier for young scientists to balance the challenges of furthering their careers while raising a family."

Daniel Arvizu, National Science Board (NSB) Chairman said, "Dr. Suresh has provided extraordinary vision and leadership to position NSF to extract even greater benefits from the national investment in science than ever before. His accomplishments are many, but noteworthy are his unprecedented engagement and collaboration with the international community and his interest to ensure that NSF-sponsored science results find their way more quickly into the marketplace. We will certainly miss his leadership and friendship on the NSB, but wish him well and continued success as he takes the helm at one of nation's finest academic institutions."

Alan Leshner, Chief Executive Officer of the American Association for the Advancement of Science and NSB member said, "Subra Suresh brought impressive vision and vigor to the directorship of NSF. He began a series of initiatives that will have lasting impact in advancing science, engineering and scientific careers in many venues where science is done, whether academia or industry."

Suresh was nominated in 2010 by President Barack Obama and unanimously confirmed by the U.S. Senate to lead NSF, a $7 billion independent federal science agency charged with advancing all fields of fundamental science and engineering research and related education. Previously, Suresh served as dean of the School of Engineering at the Massachusetts Institute of Technology (MIT) and has been on leave as the Vannevar Bush Professor of Engineering at MIT while serving as NSF Director.

STATEMENT FROM THE PRESIDENT ON THE DEPARTURE OF SUBRA SURESH

THE WHITE HOUSE
Office of the Press Secretary

We have been very fortunate to have Subra Suresh guiding the National Science Foundation for the last two years. Subra has shown himself to be a consummate scientist and engineer--beholden to evidence and committed to upholding the highest scientific standards. He has also done his part to make sure the American people benefit from advances in technology, and opened up more opportunities for women, minorities, and other underrepresented groups. I am grateful for his service.