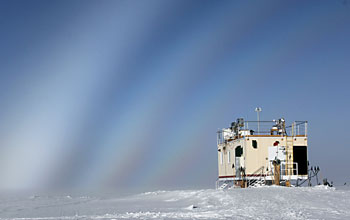 Clouds over the central Greenland Ice Sheet last July were "just right" for driving surface temperatures there above the melting point, according to a new study by scientists funded by the National Science Foundation (NSF) and at the National Oceanic and Atmospheric Administration (NOAA).

The study, published in the April 4 edition of the journal Nature, found that thin, low-lying clouds allowed the sun's energy to pass through and warm the surface of the ice, while at the same time trapping heat near the surface of the ice cap. This combination played a significant role in last summer's record-breaking melt.

"It's kind of like the story of Goldilocks," said Von P. Walden, a co-author of the paper and principal investigator for the NSF-funded Integrated Characterization of Energy, Clouds, Atmospheric State, and Precipitation at Summit (ICECAPS) project.

ICECAPS is part of NSF's developing Arctic Observing Network (AON), which encompasses physical, biological and human observations--including indigenous knowledge--of the land, ocean and atmosphere. Data from the AON will enable the interagency, U.S. government initiative--the Study of Environmental Arctic Change--to get a handle on a wide-ranging series of significant and rapid changes occurring in the Arctic.

"Clouds are still one of the greatest uncertainties in climate models. Even though the current climate models are generally correct, we need better measurements to improve them," said Walden, a professor in the geography department at the University of Idaho. "We're doing this to avoid future surprises, and we need to expand our knowledge of the details of how the climate operates."

The new findings, Walden added, not only have important implications for the study of the climate in the Arctic, but also provided a measure of "ground-truthing" for evidence found in ice cores--cylinders of ice drilled out of the ice sheet--that similar melting events have occurred in the past. According to ice-core records, the last time the surface at Summit experienced any degree of melting was in 1889, but it is not known whether this extended across the entire ice sheet.

Matthew Shupe, an ICECAPS investigator and a research meteorologist with NOAA's Cooperative Institute for Research in Environmental Sciences at the University of Colorado and the NOAA Earth System Research Laboratory added, "to understand the region's future, you'll need to understand its clouds. Our finding has implications for the fate of ice throughout the Arctic."

Scientists around the world are trying to understand how quickly Greenland is warming because ice melt there contributes to sea level rise globally. The Greenland Ice Sheet is second only to Antarctica in ice volume. In July, more than 97 percent of the Greenland Ice Sheet surface experienced some degree of melting, including at NSF‘s Summit Station, high atop the ice sheet, where the ICECAPS experiment is located.

To investigate whether clouds contributed to, or counteracted, the surface warming that melted the ice, the authors modeled the near-surface conditions. The model was based on observations from a suite of sophisticated atmospheric sensors operated as part of the ICECAPS experiment.

"The July 2012 ice melt was triggered by an influx of unusually warm air sweeping in from North America, but that was only one factor," said David Turner, research meteorologist with the NOAA National Severe Storms Laboratory and one of the lead investigators. "In our paper, we show that low-lying clouds containing a low amount of condensed water were instrumental in pushing surface air temperatures up above freezing and causing the surface ice to melt."

Clouds can cool the surface by reflecting solar energy back into space, and can warm it by radiating heat energy back down to the surface. The balance of those two processes depends on many factors, including wind speed, turbulence, humidity and cloud "thickness," or liquid water content.

In certain conditions, these clouds can be thin enough to allow some solar radiation to pass through, while still "trapping" infrared radiation at ground level. That is exactly what happened last July: the clouds were just right for maximum surface warming. Thicker clouds would have reflected away more solar radiation; thinner ones couldn't have trapped as much heat, and in either of those cases, there would have been less surface warming.

The researchers also found these thin, low-lying liquid clouds occur 30 to 50 percent of the time in summer, both over Greenland and across the Arctic. Current climate models tend to underestimate their occurrence in the Arctic, which limits those models' ability to predict how clouds and their warming or cooling effects may respond to climate change.

"The cloud properties and atmospheric processes observed with the Summit Station instrument array provide a unique dataset to answer the large range of scientific questions we want to address," said Turner. "Clouds play a big role in the surface mass and energy budgets over the Greenland Ice Sheet. Melting of the world's major ice sheets can significantly impact human and environmental conditions via its contribution to sea-level rise."

"Our results may help to explain some of the difficulties that current global climate models have in simulating the Arctic surface energy budget, including the contributions of clouds," said Ralf Bennartz, lead author for the study and an ICECAPS investigator at the University of Wisconsin-Madison.

"Above all, this study highlights the importance of continuous and detailed ground-based observations over the Greenland Ice Sheet and elsewhere. Only such detailed observations will lead to a better understanding of the processes that drive Arctic climate."