In Last Great Age of Warmth, Carbon Dioxide at Work...But Not Alone 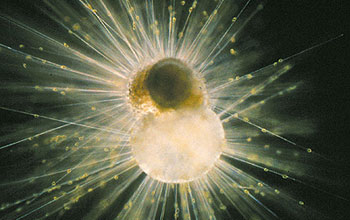 The geochemistry of microscopic plankton (foraminifera) was used to reconstruct ocean temperatures.

Temperature patterns during Earth's last prolonged global "hot spell"--the Pliocene, some 5.3 to 2.6 million years ago--differed dramatically from those of modern times, according to results reported in this week's issue of the journal Nature.

Cloud feedbacks, ocean mixing and other factors must have played a greater role in Pliocene warming than previously recognized, and these must be accounted for to make meaningful predictions of Earth's future climate, the scientists said.

"This study shows that no one mechanism can explain all the observations," says Candace Major, a program director in the National Science Foundation's (NSF) Division of Ocean Sciences, which funded the research.

The data come from studies of the geochemistry of microfossils (microscopic shells of tiny plankton) preserved in deep-sea sediments.

"If we want to understand our future climate, we have to be able to understand the climate of the past," said Fedorov, an author of this week's paper.

"The Pliocene Epoch attracts particular attention because of similar carbon dioxide levels to what we have had over the last few decades, but its climate was markedly different in several important ways," he said.

"If we're able to simulate early Pliocene climate, however, we will be more confident in our ability to predict future climate change."

Warm and temperate, the Pliocene is widely viewed as a potential analog for a future hot Earth.

Using chemical fingerprints in ocean sediments to estimate sea surface temperatures, the researchers describe long-term climate trends from the early Pliocene to the present, comparing that ancient climate with today's.

The Pliocene Earth had the same maximum temperature as today, and a similar concentration of atmospheric carbon dioxide, but waters in the Tropics--off the coast of Peru, for example--were much warmer than they are now, resembling modern El Niño conditions.

There was little to no east-to-west temperature variation along the equator. Temperature differences between high latitudes and the Tropics were also much smaller.

Kira Lawrence of Lafayette College, also an author of the paper, said that "we have been focused on changes in the global mean temperature. What our study demonstrates is the potential for climate patterns to be markedly different in a world that is not that much warmer than today's."

But accounting for this in climate models still results in a conflict with actual temperature patterns.

The scientists have proposed several factors to explain warm temperatures during the Pliocene.

They include ocean mixing in subtropical waters, perhaps due to widespread hurricanes and diminished cloud reflectivity, maybe a result of a different aerosol composition. Both would tend to warm the ocean.

When combined in models with higher levels of carbon dioxide, they help replicate conditions of the warm Pliocene Earth.

But so far these factors have not been included in climate models used to make future projections, the researchers said.

A better understanding of what drove Pliocene climate, with its nearly uniform tropical ocean temperatures, will increase our confidence in the models, said Fedorov.

"We can't discount a possible future that has a vast pool of warm water covering the tropics, and the changes in atmospheric circulation and rainfall that would go along with that," said paper author Chris Brierley of the University College London.

In addition to NSF, the research was supported by the U.S. Department of Energy, the David and Lucile Packard Foundation and Yale University.