Researchers use pitcher plants to identify signs of trouble dead ahead 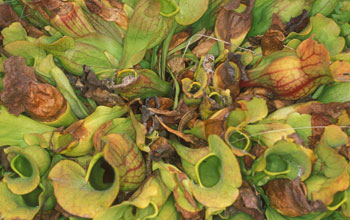 In scientists' eyes, each leaf of the northern pitcher plant is a small ecosystem.

In one drop of water are found all the secrets of all the oceans.

What do a pond or a lake and a carnivorous pitcher plant have in common?

The water-filled pool within a pitcher plant, it turns out, is a tiny ecosystem whose inner workings are similar to those of a full-scale water body.

Whether small carnivorous plant or huge lake, both are subject to the same ecological "tipping points," of concern on Earth Day--and every day, say scientists.

The findings are published in this week's issue of the journal Proceedings of the National Academy of Sciences.

"Human societies, financial markets and ecosystems all may shift abruptly and unpredictably from one, often favored, state to another less desirable one," says Saran Twombly, program director in NSF's Division of Environmental Biology, which funded the research.

"These researchers have looked at the minute ecosystems that thrive in pitcher plant leaves to determine early warning signals and to find ways of predicting and possibly forestalling such 'tipping points.'"

Life in lakes and ponds of all sizes can be disrupted when too many nutrients--such as in fertilizers and pollution--overload the system.

When that happens, these aquatic ecosystems can cross "tipping points" and change drastically. Excess nutrients cause algae to bloom. Bacteria eating the algae use up oxygen in the water. The result is a murky green lake.

"The first step to preventing tipping points is understanding what causes them," says Aaron Ellison, an ecologist at Harvard Forest and co-author of the paper. "For that, you need an experiment where you can demonstrate cause-and-effect."

Ellison and other scientists demonstrated how to reliably trigger a tipping point.

They continually added a set amount of organic matter--comparable to decomposing algae in a lake--to a small aquatic ecosystem: the tiny confines of a pitcher plant, a carnivorous plant native to eastern North America.

Each pitcher-shaped leaf holds about a quarter of an ounce of rainwater. Inside is a complex, multi-level food web of fly larvae and bacteria.

"The pitcher plant is its own little ecosystem," says Jennie Sirota, a researcher at North Dakota State University and lead author of the paper.

Similar to lake ecosystems, oxygen levels inside the water of a pitcher plant are controlled by photosynthesis and the behavior of resident organisms--in this case, mostly bacteria.

Ellison says that conducting an experiment with bacteria is like fast-forwarding through a video.

"A bacterial generation is 20 minutes, maybe an hour," he says. "In contrast, fish in a lake have generation times of a year or more.

"We would need to study a lake for 100 years to get the same information we can get from a pitcher plant in less than a week."

The same mathematical models, Ellison and colleagues discovered, can be used to describe a pitcher plant or a lake ecosystem.

To approximate an overload of nutrients in pitcher-plant water, the team fed set amounts of ground-up wasps to the plants.

"That's equivalent to a 200-pound person eating one or two McDonald's quarter-pounders every day for four days," says Ellison.

In pitcher plants with enough added wasps, an ecosystem tipping point reliably occurred about 45 hours after the start of feeding.

The scientists now have a way of creating tipping points. Their next step will be to identify the early warning signs.

"Tipping points may be easy to prevent," says Ellison, "if we know what to look for."

Other authors of the paper are Benjamin Baiser of Harvard Forest and Nicholas Gotelli of the University of Vermont.