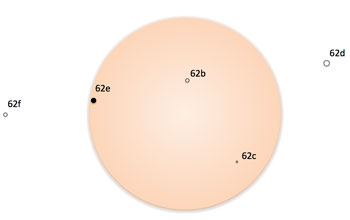 This diagram shows the relative sizes of the five planets as compared to the star.

Eric Agol, an associate professor of astronomy at the University of Washington in Seattle, has identified Kepler 62f, a small, probably rocky planet orbiting a sun-like star in the Lyra constellation. The planet is about 1.4 times the size of Earth, receives about half as much solar flux, or heat and radiation, as Earth and circles its star in 267.3 (Earth) days.

Agol is a co-author of a paper published April 18 in Science Express, the online edition of the journal Science. Agol received his CAREER award in 2007. NSF CAREER awards support junior faculty who exemplify the role of teacher-scholars through outstanding research, excellent education and the integration of education and research within the context of the mission of their organization.

"We are pleased that the NSF CAREER award for Dr. Agol provided him the long-term support to develop the techniques for this exciting discovery," said NSF Division Director for Astronomical Sciences Jim Ulvestad. "We are grateful that he was able to make use of NASA's highly successful Kepler satellite to conduct his research."

The planet Agol discovered is one of two "super-Earth" planets discovered in Kepler 62's habitable zone, that swath of space the right distance from the star to potentially allow liquid water to exist on a planet's surface, thus giving life a chance. A super-Earth is a planet greater in mass than our own but still smaller than gas giants such as Neptune.

"The planets this small that we have found until now have been very close to their stars and much too hot to be possibly habitable. This is the first one we've found in the habitable zone that satisfies this small size," Agol said. "Kepler 62f, the smallest in the habitable zone of the Kepler 62 system, is by some measures the exoplanet the most similar to Earth that's been found yet."

Kepler 62's other super-Earth, nearby 62e, is 1.61 times Earth's size, circles the star in 122.4 days and gets about 20 percent more stellar flux than the Earth. The two are the smallest exoplanets--planets outside the solar system--yet found in a host star's habitable zone. While the sizes of Kepler 62e and 62f are known, Agol said, their mass and densities are not--but every planet found in their size range so far has been rocky, like Earth.

The planet is named after the Kepler Space Telescope, a NASA-funded mission launched in 2009 with the aim of finding Earthlike planets beyond the solar system. It detects planets by "transits" that cause their host stars to appear fainter when the planets pass in front as they orbit. Kepler 62 b, c and d, the other planets orbiting the star, are 1.31, 0.54 and 1.95 times the size of the Earth, respectively, but orbit the star too close to be in the habitable zone. These planets were found by a team of researchers led by Dr. William Borucki (NASA Ames Research Center) and Principal Investigator of Kepler.