NSF Joins Forces with Intel and GE to Move the Needle in Producing U.S. Engineers and Computer Scientists

Under "Graduate 10K+", $10 million is awarded to nine institutions whose projects aim to increase retention of undergraduates in engineering and computer science 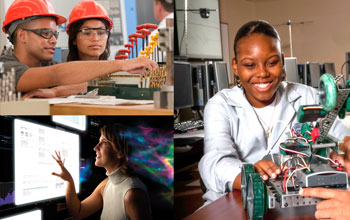 Engineering and computer science are dynamic fields with a range of career possibilities.

Imagine a young athlete arriving at a university with the potential to win big over the next four years. Now imagine this athlete sitting out an entire season while practicing with the team and getting the lay of the land. This strategy is called redshirting, and it has proven to be an effective way to prepare athletes for success.

Now imagine using the same concept for preparing undergraduates for a degree in engineering. It's just one of the creative approaches being taken by institutions that are receiving grants through a public-private partnership called Graduate 10K+--so named because of its goal of stimulating comprehensive action at universities and colleges to help increase the annual number of new graduates in engineering and computer science by 10,000.

Through Graduate 10K+, the National Science Foundation (NSF) has partnered with Intel and GE in making grants to institutions whose projects aim to improve retention of undergraduates in engineering and computer science. This effort is funded with $10 million in donations from Intel and the GE Foundation as well as a generous personal donation from Mark Gallogly.

Engineering and computer science are fields in which industry leaders lament an inadequate supply of graduates with the knowledge and skills needed in business and industry.

Both fields are dynamic--encompassing areas of focus that didn't even exist a couple of decades ago--from green energy and advanced robotics to cybersecurity.

Engineering and computer science offer good careers with salaries that can make a life-changing difference, especially to first-generation college students and their families. These are fields in which women and minorities are chronically underrepresented. Engineering and computer science are also part of a general trend in which many undergraduates pursuing majors in science, technology, engineering and mathematics (STEM) fields leave STEM entirely during their first two years in college. President Obama has made it a goal of his Administration to address this problem and work to produce a million new STEM graduates in the next decade.

"We welcome the opportunity to partner with industry to address the need to engage and retain graduates in engineering and computer science," said NSF Acting Director Cora Marrett. "This partnership is a starting point, and we anticipate that others from the corporate and non-profit world will become partners in this important venture."

"Undergraduate STEM education plays an essential role in strengthening the nation's economy and ensuring the quality and competitiveness of its workforce. As an American advanced manufacturer, supporting our future engineers and computer scientists is critical," said Kimberly Stevenson, Intel's Chief Information Officer. "Public-private partnerships like Graduate 10k+ are foundational to advancing STEM education."

"The GE Foundation has a long-term commitment to helping students at the K-12 level prepare for college, and eventually their future career," said Kelli Wells, director of U.S. education for the GE Foundation. "Our support for Graduate 10K+ takes that support a step further and at critical moment when students are choosing their major."

Graduate 10K+ projects will operate for five years. Each of the projects has identified factors that can derail would-be engineers and computer scientists in their first or second year of undergraduate study and taken a targeted approach to addressing those factors.

Applying the redshirt concept to engineering students is part of a collaborative project between the University of Washington and Washington State University. This strategy originated at the University of Colorado, where it's been very successful. The new project, the Washington STate Academic RedShirt (STARS) in Engineering Program, recruits highly motivated Pell-Grant-eligible students from high-needs high schools into a five-year program that sets the stage for success as an engineering major.

Among the challenges STARS is addressing is a common denominator in all the Graduate 10K+ projects--a lack of readiness in mathematics among entering students. Through UW's Math Academy, rising high school seniors do math for six hours a day, getting exposure to engineering in the process. The first targets for STARS students will be students from the Math Academy, along with some who applied but didn't get in, creating for them a kind of year-long bridge program where they receive support in getting up to speed on the math competence they need to be successful in engineering.

"Engineering education needs to adapt to the tortoises, not just the hares," said Eve Riskin, principal investigator of STARS. "We're talking about investing an extra year in what will hopefully be a 30-year engineering career."

Students are organized into cohorts that are maintained from enrollment to graduation, and students receive academic support and career development support through workshops and internship placements. The catalyst for the partnership and endeavor is the crucial scholarship support from a local, private organization, the Matsui Foundation, which has committed significant scholarship support for the first three cohorts of students in the CSIT-In-3 program.

"We are rethinking the degree model by going beyond the boundaries of institutions, courses and semesters to build a program around the student cohorts," said Sathya Narayanan, principal investigator of the project. "The three-year timeframe allows us to engage the students in a continuous and intensive manner."

Many of the Graduate 10K+ projects build on earlier research and seek to measure the impact of their approaches, setting goals for increased numbers of graduates in engineering and/or computer science, and increased participation of underrepresented groups.

"We're excited about the range of projects and their potential for moving the needle on producing skilled and capable graduates in these fields," said Joan Ferrini-Mundy, who leads NSF's Education and Human Resources directorate. "I'm glad to see the attention placed on creating a research trail so that we can continue to build on the most successful strategies."

The awardees and their projects are listed below.

Enhancing the Climate for Persistence and Success in Engineering (ECliPSE)

University of Texas at Austin

Improving Retention in Engineering by Incorporating Applications Into Freshman Calculus