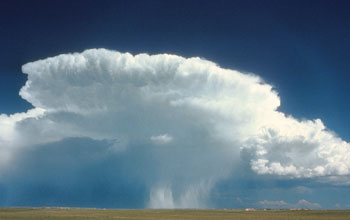 To better predict where and when spring thunderstorms rip across Colorado's Front Range and the adjacent Great Plains, researchers are launching a major field project this week with high-flying aircraft and fine-grained computer simulations.

The month-long study could point the way to major improvements in lead times for weather forecasts during what has been called a crucial six- to 24-hour window.

"People want to know whether there will be thunderstorms and when," says National Center for Atmospheric Research (NCAR) scientist Morris Weisman, one of four principal investigators on the project.

"We're hoping to find out where you need to collect observations in order to get the most improvement in short-term forecasts. Better prediction with a few hours of lead time could make a big difference in helping people prepare."

MPEX (pronounced "em-pex"), the Mesoscale Predictability Experiment, runs from May 15 to June 15 and is funded by the National Science Foundation (NSF).

"MPEX will lead to a better understanding of the initiation and development of severe storms in an area of the country that's particularly affected by them," says Chungu Lu, program director in NSF's Division of Atmospheric and Geospace Sciences.

"If we can move 'early warnings' even sooner through the results of MPEX, it will lead to safer skies for air travelers and safer situations on the ground as well."

The project will include early morning flights with the NSF/NCAR Gulfstream V aircraft to sample the pre-storm atmosphere across Colorado and nearby states.

The Gulfstream V can cruise at 40,000 feet for up to six hours, which will enable researchers to thoroughly canvass the entire region where triggers for severe weather might be lurking.

MPEX will also include afternoon launches of weather balloons carrying instrument packages called radiosondes, which will profile conditions around thunderstorms as they develop and move east across the Great Plains.

Severe weather warnings from the National Weather Service give people up to an hour's notice for tornadoes and other threats on a county-by-county basis. A key goal of MPEX is to help improve the forecasts that fall between two types of longer-range alerts:

Same-day forecasts often note the likelihood of severe storms, but they do not usually specify where and when the storms will develop.

MPEX will help determine whether more detailed observations and simulations could lead to more specific forecasts of storm location and behavior as much as a day in advance.

Advanced forecast models can now simulate the weather using data at points packed as closely as about a half-mile from each other. This allows showers and thunderstorms (known as "convection") to be explicitly depicted. But the newer models still struggle to reliably map out storm behavior beyond about six hours in advance.

Scientists believe this may be largely because the models need more detail on upper-level features, such as pockets of strong wind or dry air, located several miles above ground level.

As these features move into the Great Plains, they can be critical for triggering or suppressing severe storms. However, weather satellites may not see these features, and they often go undetected by limited surface and upper-air networks across the Rocky Mountain states.

"The structure of the atmosphere two to six miles above sea level is incredibly important," Weisman says. "This appears to be where the biggest forecast errors develop, so we need to collect more data at these heights."

In the sky and on the ground

To get around the data roadblock, MPEX will send the Gulfstream V from its base at the Rocky Mountain Metropolitan Airport in Broomfield on missions that will start as early as 3 a.m.

The Gulfstream V will sample jet-stream winds, upper-level temperatures, and other features across Colorado and nearby states.

The aircraft will use a microwave-based temperature sensor to profile horizontal temperature contrasts miles above the region.

At pre-specified locations, the Gulfstream V will also use parachute-borne minisondes--compact instrument packages, similar to the 200-plus radiosondes used every day across the nation--to gather extra detail between flight level and ground level.

The minisondes will provide information on temperature, moisture, and winds four times each second.

"The Gulfstream V is perfect for this kind of study," says NCAR project manager Pavel Romashkin, who will oversee MPEX aircraft operations. "The G-V is one of very few aircraft in weather research that can sample the atmosphere near the top of important features for a number of hours."

MPEX will also gather data with three radiosonde launch units operated by Purdue and NSSL in vehicles that will maneuver around late-day thunderstorms.

The goal is to find out how well the extra data can help predict local and regional weather conditions into the next day, as well as to assess how the thunderstorms interact with the atmosphere that surrounds and supports them.

"We know that even isolated, short-lived thunderstorms influence their environment," says Robert "Jeff" Trapp of Purdue, an MPEX principal investigator.

"The MPEX data will allow us to quantify these influences and examine how well they are represented in computer forecast models. This information can then be used to help improve weather forecasts."

Testing the value of enhanced observations

With the help of improvements in computing power and scientific understanding, forecast models can depict weather in far more detail than just a few years ago.

On each day of operations (about 15 in all during the project), MPEX will produce an ensemble of up to 30 forecasts using the NCAR-based research version of the multiagency Weather Research and Forecasting model (WRF-ARW).

Along with data from the Gulfstream V flights, each WRF-ARW ensemble member will use a slightly different characterization of early-morning weather conditions in order to allow for the uncertainty inherent in those measurements.

Forecasters can then issue forecasts with greater or lesser confidence based on how the ensemble forecasts agree or disagree.

The MPEX team will also evaluate how much the Gulfstream V data improve forecasts in two other modeling systems, both of which are updated each hour.

The complex process of incorporating observed data into the MPEX simulations will be handled by NCAR's Data Assimilation Research Testbed.

Studies have shown that major forecast improvements are possible when the right kinds of data are collected and assimilated into forecast models.

Scientists hope the results from MPEX will help advance this process, which could improve predictions of severe thunderstorms as well as other types of high-impact weather where better forecasts in the six- to 24-hour period could help people and communities better prepare.