A chronicle of a research cruise aboard NSF's Nathaniel B. Palmer becomes a media sensation 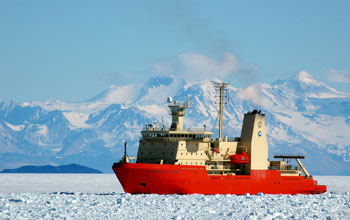 The research vessel Nathaniel B. Palmer in McMurdo Sound, Antarctica, in 2011.

Cassandra Brooks is a Stanford University doctoral student with the Emmett Interdisciplinary Program in Environment and Resources.

She spent two months in 2013 aboard the National Science Foundation-operated icebreaker Nathaniel B. Palmer as part of a research cruise investigating the role of dissolved organic carbon in the Ross Sea ecosystem.

She--and a video she produced on the voyage--became worldwide media sensations, appearing in stories published by sources as diverse as the San Jose Mercury News, CNN and YouTube. The video is a time-lapse sequence, compressing about 60 days into less than five minutes, taken from the ship's bridge as the ship "carves" forward through the ice.

A version of the video may be viewed on YouTube.