NSF and NICT of Japan Announce Partnership in Next-Generation Networking 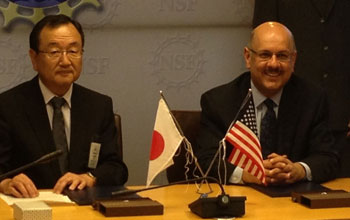 Principals from the National Science Foundation (NSF) and the National Institute of Information and Communications Technology (NICT) of Japan today signed a memorandum of understanding (MOU), facilitating a partnership on research in networking technology and systems enabling future Internet/new-generation networks.

This MOU follows the third Director General-level meeting of the U.S.-Japan Policy Cooperation Dialogue on the Internet Economy held in Tokyo, Japan, in March 2012, at which U.S. and Japanese researchers articulated the need for research and development into a new architecture enabling more robust and evolvable future Internet design.

As part of these discussions, three topics of mutual interest emerged:

The signing of the MOU today establishes a formal working relationship between NSF and NICT to support research and development on these topics.

"I am excited and enthusiastic about this new partnership between NSF and NICT," said Jahanian. "This agreement will create new opportunities for collaboration between top researchers in the United States and Japan, and forge new pathways to future global networks."

The MOU will enable NSF and NICT to work together on joint funding opportunities, facilitating collaborations among U.S. and Japanese researchers in these areas.

This agreement is considered a continuation of a history of collaboration between NSF and NICT. For example, NICT has tracked the NSF-funded Global Environment for Networking Innovation (GENI) project since its inception in 2007, and in 2010 the two agencies jointly funded a set of U.S./Japan proposals in the area of future Internet design. These projects helped establish new collaborations among researchers from both countries.

Calling joint projects "our precious treasure" and expressing a necessity "to keep encouraging them to go further," Imase applauded the agreement with optimism for the future. "I hope today's MOU will strengthen [the] partnership between NICT and NSF and we can continue to support many researchers in the U.S. and in Japan for successful and meaningful collaborations."