Evolution in the Blink of an Eye

Diseases may rapidly evolve to become more--or less--virulent, according to songbird study 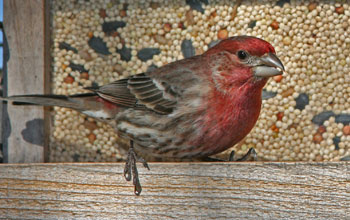 A healthy male house finch visits a seed feeder; the finches are common at bird feeders.

A disease in songbirds has rapidly evolved to become more harmful to its host at least twice in two decades, scientists report.

The research offers a model to help understand how diseases that threaten humans may change in virulence as they become more prevalent in a host population.

"Everybody who's had the flu has probably wondered at some point: 'Why do I feel so bad?'" said Dana Hawley of Virginia Polytechnic Institute, lead author of a paper on the results published today in the journal PLOS Biology.

"That's what we're studying: Why do pathogens cause harm to the hosts they depend upon? And, why are some life-threatening, while others only give you the sniffles?"

Disease virulence is something of a paradox.

"The jumping of a pathogen to a new host, such as bird flu jumping to humans, is just the first step of disease emergence," said Sam Scheiner, National Science Foundation (NSF) program director for the joint NSF‒National Institutes of Health Ecology and Evolution of Infectious Diseases Program, which funded the research.

"The subsequent evolution of that pathogen in its new host can be critical to determining further [pathogen] spread," Scheiner said.

"This study is the first to confirm predictions that pathogens may evolve to become more deadly. The results are important for planning responses to events such as the bird flu outbreak in China."

To spread, viruses and bacteria must reproduce in great numbers. But as their numbers increase inside a host's body, the host gets more and more ill.

So a highly virulent disease runs the risk of killing or debilitating its hosts before the hosts can transmit the bug along. But sometimes pathogens find the right balance through evolution. The new study shows that can happen in just a few years.

Hawley and co-authors studied house finch eye disease, a form of conjunctivitis, or pinkeye, caused by the bacteria Mycoplasma gallisepticum.

It first appeared around Washington, D.C., in the 1990s. The house finch is native to the Southwest but has spread to towns and backyards across North America.

The bacteria are not harmful to humans, which makes them a good model for studying the evolution of dangerous diseases such as SARS, Ebola and avian flu.

"There's an expectation that a very virulent disease will become milder over time, to improve its ability to spread," said André Dhondt, director of bird population studies at Cornell University. "Otherwise, it just kills the host and that's the end of it for the organism.

"House finch eye disease gave us an opportunity to test this--and we were surprised to see it actually become worse rather than milder."

The researchers used frozen bacterial samples taken from sick birds in California and along the Eastern Seaboard on five dates between 1994 and 2010, as the pathogen was evolving and spreading.

The samples came from an archive maintained by co-author David Ley of North Carolina State University, who first isolated and identified the causative organism.

The team experimentally infected wild-caught, house finches, then measured how sick the birds got with each sample. The researchers kept the birds in cages as they fell ill then recovered (none of the birds died from the disease).

Contrary to expectations, the biologists found that in both regions--California and the Eastern Seaboard--the disease had evolved to become more virulent over time.

A less-virulent strain spread westward across the continent. Once established in California, however, the bacteria again began evolving higher virulence.

In evolutionary terms, some strains of the bacteria were better adapted to spreading across the continent, while others were more suited to becoming established in a more localized area.

"For the disease to disperse westward, a sick bird has to fly farther, and survive for longer, to pass on the infection," Hawley said. "That will select for strains that make the birds less ill.

"But when it gets established in a new location, there are lots of other potential hosts, especially around bird feeders. It can evolve toward a nastier illness because it's getting transmitted more quickly."

Though the disease does not kill birds directly, it weakens them and makes them easy targets for predators.

The disease quickly spread south along the East Coast, then north and west across the Great Plains and down the West Coast. By 1998 the house finch population in the eastern United States had dropped by half--a loss of an estimated 40 million birds.

Birdwatchers can do their part to help house finches and other backyard birds by washing their feeders in a 10 percent bleach solution twice a month.

Along with Hawley, Dhondt and Ley, the paper's authors include Erik Osnas and Andrew Dobson of Princeton University, and Wesley Hochachka of the Cornell Lab of Ornithology.