Gene transfer may play role in cancer, other diseases linked with DNA damage 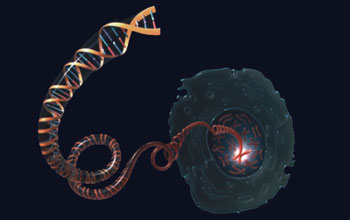 A drawing depicting a DNA molecule unwinding from a chromosome inside the nucleus of a cell.

Bacterial DNA may integrate into the human genome more readily in tumors than in normal human tissue, scientists have found.

The researchers, affiliated with the University of Maryland School of Medicine's Institute for Genome Sciences, analyzed genomic sequencing data available from the Human Genome Project, the 1,000 Genomes Project and The Cancer Genome Atlas.

They considered the phenomenon of lateral gene transfer (LGT), the transmission of genetic material between organisms in a manner other than than traditional reproduction.

Scientists have already shown that bacteria can transfer DNA to the genome of an animal.

The researchers found evidence that lateral gene transfer is possible from bacteria to the cells of the human body, known as human somatic cells.

They found that bacterial DNA was more likely to integrate in the genome in tumor samples than in normal, healthy somatic cells. The phenomenon might play a role in cancer and other diseases associated with DNA damage.

"Advances in genomic and computational sciences are revealing the vast ways in which humans interact with an ever-present and endlessly diverse planet of microbes," says Matt Kane, program director in the National Science Foundation's Division of Environmental Biology in its Directorate for Biological Sciences, which funded the research.

"This discovery underscores the benefits that can result from a shift in our understanding of how this vast diversity of microbes and their genes may affect our health."

The results may lead to advances in personalized medicine, scientists say, in which doctors use each patient's genomic make-up to determine care and preventive measures.

A paper reporting the results is published today in the journal PLOS Computational Biology.

"LGT from bacteria to animals was only described recently, and it is exciting to find that such transfers can be found in the genome of human somatic cells and particularly in cancer genomes," says Julie Dunning Hotopp of the University of Maryland School of Medicine and lead author of the paper.

Hotopp also is a research scientist at the University of Maryland Marlene and Stewart Greenebaum Cancer Center.

"Studies applying this approach to additional cancer genome projects could be fruitful, leading us to a better understanding of the mechanisms of cancer."

The researchers found that while only 63.5 percent of TCGA samples analyzed were from tumors, the tumor samples contained 99.9 percent of reads supporting bacterial integration.

The data present a compelling case that LGT occurs in the human somatic genome, and that it could have an important role in cancer and other human diseases associated with mutations.

It's possible that LGT mutations play a role in carcinogenesis, the scientists say, yet it's also possible that they could simply be "passenger mutations."

The investigators suggest several competing ideas to explain the results, though more research is needed for definitive answers.

One possibility is that the mutations are part of carcinogenesis, the process by which normal cells turn into cancer cells.

Alternatively, tumor cells are very rapidly proliferating, so much so that they may be more permissive to lateral gene transfer.

It's also possible that bacteria are causing these mutations because they benefit the bacteria themselves.

The study was also funded by the National Institutes of Health.