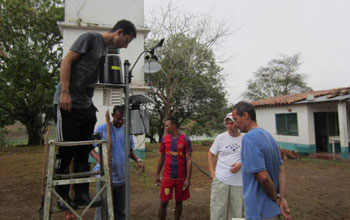 Julio Cañón's team is installing a sensor station to study climate change in the Columbian Andes.

Since its beginning just two years ago, PEER Science has invested $12 million in 98 projects in 42 countries. Previous PEER Science awardees already are seeing the positive impacts of collaborative efforts that, for example, model the risk of landslides and earthquakes in Lebanon and Bangladesh, monitor and decrease air pollution in Mongolia, and improve the resilience of coral reefs and related habitats to climate stress in Indonesia.

PEER Science awardees were selected from nearly 300 high-quality proposals and represent more than $76 million of leveraged NSF funding through collaborations with their U.S. research partners.

"With two or more parties contributing resources, a true intellectual partnership can be established, maximizing the potential to advance the pursuit of science and development in new and creative ways," she said.

Fifteen countries as geographically divergent as Brazil, Burma, Iraq, Mozambique and West-Bank Gaza are among first-time PEER Science funding recipients. The new PEER Science awards are also supporting projects with regional collaborations among developing country scientists, such as a project in the lower Mekong River region of Southeast Asia to address trans-boundary and regional scientific and technical challenges. A list of new projects may be found on USAID's website.

"We are really excited to see the growth of the PEER Science program," said Alex Dehgan, science and technology adviser to the administrator at USAID. "We are already seeing the tremendous benefits of bringing together developing and developed country researchers to solve some of our greatest global development challenges. PEER Science not only demonstrates the critical role science and technology plays in development, but also the importance of global scientific collaboration."

The third call for PEER Science proposals is expected to be announced in early September 2013.