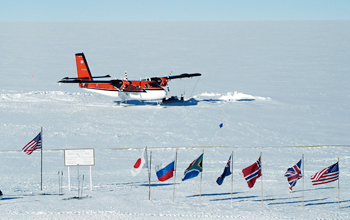 The deaths of three crew members of a Twin Otter aircraft that crashed into a mountain in Antarctica in late January have been officially attributed by a New Zealand coroner to injuries sustained in the crash.

Acknowledging that no postmortem examination could be carried out because the bodies of the crew could not be recovered from the aircraft wreckage, MacLean said that "…the cause of death was clearly multiple injuries sustained when the aircraft impacted at speed into the upper slopes of Mount Elizabeth, and there is no indication on the available evidence that there was any possible medical condition that was applicable."

The cause of the crash itself remains under investigation by the Transport Accident Investigation Commission of New Zealand and the Canadian Transportation Safety Board.

The hearing was streamed live to Canada to allow the families of the crew to observe.

At the time of the crash, the plane was flying in support of the Italian Antarctic Program and the Italian National Agency for New Technologies, Energy and Sustainable Economic Development (ENEA). The aircraft was en route from NSF's Amundsen-Scott South Pole Station to the Italian research station at Terra Nova Bay when contact was lost.

On the afternoon of Saturday, Jan. 26, local time, a ski-equipped LC-130 aircraft, operated by the New York Air National Guard for the USAP and flying from McMurdo Station, overflew the last known position from the aircraft emergency beacon and spotted the aircraft tail at an elevation of about 3,900 meters (13,000 feet) on Mount Elizabeth.

Subsequently, a Twin Otter carrying U.S. and New Zealand search-and-rescue personnel conducted an aerial survey of the site and determined that a landing at the site by fixed-wing aircraft was not possible.

Later, two helicopters--one under New Zealand charter and the other flown for the USAP by PHI, Inc., of Lafayette, La.--arrived at a small camp established roughly 50 kilometers (31 miles) from the crash location to support the operation.

The search for the aircraft involved flights by the 109th Airlift Wing of the New York Air National Guard, PHI helicopters as well as weather forecasters, mountaineers and numerous other support personnel with the U.S. Program, and their counterparts with Antarctica New Zealand. The crash investigation is also an international effort.

According to MacLean, "this has been in my view an exemplary operation of the sort of cooperation that often happens, particularly in Antarctica, in the spirit of the Antarctic Treaty; close cooperation between a wide range of agencies."

A joint search-and-rescue effort by the U.S. Antarctic Program (USAP) and Antarctica New Zealand managed to place experts at the crash site to examine the wreckage. But examination of the plane indicated that it would be unsafe to further disturb the wreckage, which was largely embedded in snow and ice on a steep mountain slope.

The team was able to recover some equipment from the exposed tail of the deHavilland DHC-6 Twin Otter, including the cockpit voice recorder. However, the team was unable to safely recover the remains of the crew. At the time, with the advent of the Antarctic winter and the generally poor weather conditions at the crash site, the effort to recover the remains was halted.

Any future effort to recover the remains would need to address the significant logistical challenges and safety risks of the extreme terrain and isolation of the site.