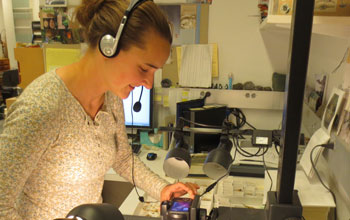 Over centuries of discovery, the diversity of life on Earth has been documented in numerous ways.

Records of that biodiversity are, however, often obscured in varied and distinct natural history collections, making accessing the information a difficult task.

The National Science Foundation (NSF), through its Advancing Digitization of Biodiversity Collections (ADBC) Program, is responding to the need for greater accessibility of biodiversity collections data by awarding major new grants.

The funding will expand the scope of the national resource of digital data documenting existing biodiversity collections.

The awards are part of the National Resource for Digitization of Biological Collections; all data resulting from the awards will be available through the national resource.

Biological diversity is critical to the future of planet Earth, say researchers. Incomplete information on species, their distributions and environmental and biological changes over time make it difficult, however, to assess the status of and changes in biodiversity.

Much of the relevant information exists in research collections, scientists say, but the majority isn't integrated and isn't readily available online.

It's "dark data"--inaccessible to most biologists, policy-makers and the general public.

"The collections being digitized are unprecedented in their worth to research and education and hold huge potential for future development and integration with other biological data from genomes to phenomes," says Wingfield.

The program will result in more efficient and innovative ways of providing access to information in biological and paleontological research collections.

It will also help speed up the process of integrating diverse information on the genetic, ecological, organismal (including vocalizations), molecular biology and evolutionary history of specimens in collections.

"During the past 200 or more years, an abundance of fossil collections that are scientifically documented, biotically diverse and geologically distributed in time and space has been accessioned into non-federal museums across the U.S.," says Wendy Harrison, director of NSF's Division of Earth Sciences.

Such collections, she says, are the building blocks for paleontology, stratigraphy, paleogeography, paleoceanography and paleoecology.

"These scientific 'treasures' are of great importance to our search and production of fossil fuels and minerals, as well as to unraveling the history of the Earth and life itself," says Harrison.

"Having the vital statistics and visuals of these collections available on the Web will place these sciences on a new level of integration and understanding."

Standardized digital photos of specimens will be linked with, for example, sound recordings, pathogens found on the specimens, stratigraphic information for fossils, environmental variables at the collecting localities and electron micrographs.

The awards provide graduate and undergraduate training opportunities and outreach to K-12 educators, students and non-scientists.

"The new fossil insect TCN, for example, promises to accelerate our understanding of the insect world--past, present and future," says Lane.

The awards include 65 institutions in 29 states and one territory.

In addition, five Partners to Existing Networks (PEN) were funded.

These efforts allow institutions that were not fully ready to participate in a TCN to add to their collections and fill in gaps.

Two PEN awards have been made that will increase the coverage of the Paleoniches TCN. The TCN is focused on critical specimens needed to identify organisms and environments from ages and localities not previously included.

A third PEN will expand the Southwest Arthropod Network, which also includes field guides for the Navajo reservation area; a fourth PEN will add central Midwest specimens to the InvertNet TCN; and a fifth will add two historically important collections to the lichen and bryophyte TCN.

The five PEN awards are:

Title: (PEN) Increasing the Robustness of the Ordovician and Pennsylvanian Dataset of PALEONICHES-TCN

Title: (PEN) Facilitating a Shared Image Library and Occurrence Database for Ants of the Southwest as Part of the SCAN TCN